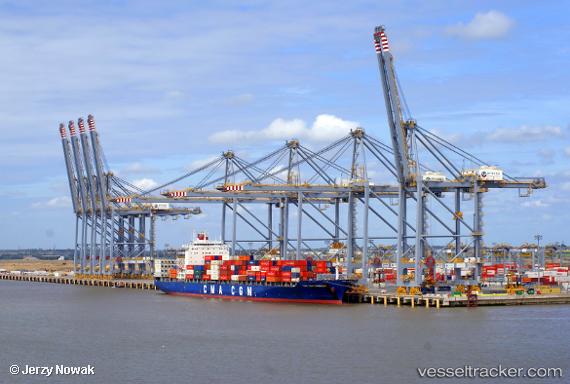 Warehouse will offer cold storage, quality control, packing and customs clearance among other services. Construction of the 107,155 sq ft cold store facility at the port’s logistics park will begin later in 2018 with operations expected to start in early summer 2019. As well as featuring chilled and frozen chambers, additional services will include quality control, packing, sorting, labelling, palletisation and bagging. There will also be customs clearance, shunting (transfer from the quay to the warehouse) and delivery transportation (last-mile delivery). The liner hopes its new one-stop-shop facility will save time and money for importers and exporters, as well as reducing waste and carbon use by reducing haulier mileage. The site, which will include a one-hectare cold store within a 2.4-hectare logistics plot on the River Thames, will have close access to main roads into London.

A off-dock empty container storage yard is to be opened at DP World London Gateway Port. The five acre yard will be operated and managed by Solent Stevedores, an award-winning stevedoring company with a broad range of bulk and general cargo handling and storage services at ports in Southampton, Jersey, Immingham and London. Work to develop the yard will commence next month, with it then due to become operational by the first quarter of 2018. https://www.porttechnology.org/news/dp_world_london_opens_new_facility

The first ever UK to China export train departed on Monday, April 10, laden with containers full of British goods, the company said in its press release. The train will make the 7,500 mile, three-week-long journey, departing from DP World London Gateway’s state-of-the-art rail terminal in South Essex, bound for Yiwu in the Zhe Jiang province in eastern China. Products on board include soft drinks, vitamins, pharmaceuticals and baby products. This inaugural export train bound for China departed just under three months after the first ever import train from China arrived in the UK. The service is part of China's One Belt, One Road programme - reviving the ancient Silk Road trading routes to the West. After passing through the channel tunnel into France and Belgium, the DB Cargo locomotive will call in Duisburg, Germany before InterRail pull the cargo through Poland, Belarus, Russia and Kazahkstan before the train crosses to Yiwu, China.