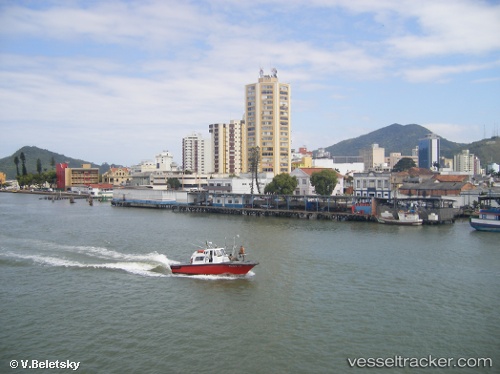 IN a boost to the terminal operator, APM Terminals facilities in Itajai, Brazil, and Buenos Aires, have been included in the rotation of a joint service deployed by Hapag-Lloyd, NYK Line, ZIM, Hyundai Merchant Marine (HMM) and Hamburg Sud The weekly Asian service, operated jointly with 13 vessels will call the ports of Kelang, Singapore, Qingdao, Shanghai, Ningbo, Hong Kong, Shenzhen-Shekou and Busan before calling at Terminal 4 Buenos Aires in late August, according to London's Container Management magazine. In Brazil, the first vessel is scheduled to arrive at APM Terminals Itajai in early September. The service will call at the port in Santa Catarina state bi-weekly until April 2018, due to turning basin restrictions for six of the 13 vessels in the string which exceed 300 metres in length. With the completion of the expanded turning basin in the Itajai/Navegantes river complex next year, the weekly service will be introduced. Source: shednet

Shippers using the container terminals overseen by the Itajai Port Authority are livid with the Brazilian government for failing to provide emergency dredging needed so container lines can fully load their ships. Although the government has provided funding for the emergency dredging, the 65 million reais ($19.82 million) set aside to restore the terminals’ depth of between 12.8 meters and 13 meters (42 feet and 42.6 feet) at low tide was so low that no dredging outfits even placed a bid for the work. The situation could be worse though, as an unusually dry spell of weather has helped to protect the flood-prone terminals from being inundated. The terminals had to temporarily close in October because of flooding from heavy rain, the origin of the dredging emergency, and was seriously damaged in a bout of 2008 flooding. http://www.joc.com/port-news/south-american-ports/itajai-shippers-slam-brasilia-lack-emergency-dredging-aid_20160719.html

APM Terminals has changed tack in its attempt to persuade the Brazilian government to grant it a concession extension at its Port of Itajaí container terminal. Previously, it had sought an extension based on the investment that it had made there. However, following a suggestion from the Attorney General’s Office, it is now seeking to justify this as a means of recovering losses brought about by unexpected problems that it has encountered, mainly floods in 2008 and 2011. APM Terminals acquired concessionaire Teconvi when it had 19 years to run on its concession, with the possibility to renew this for a further three years to the end of 2022. However, the company believes it will be impossible to sufficiently recoup its subsequent investment in the seven years remaining to it. http://www.hellenicshippingnews.com/apm-terminals-chases-itajai-concession-extension/