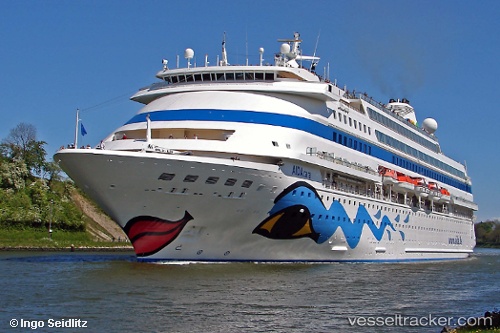 Cruise ships laid up in Visby

On MAy 3, 2020, the 'Aidacara' docked at Visby's cruise wharf for lay up due to the corona pandemic. Another ship will be coming this week and more may be on the way. After sending out inquiries to a number of Swedish ports, including Gothenburg, Visby was chosen. On May 8, the 'Aidaaura' wull follow. The ships were being manned with a minimum crew of 100 people. None of them will be allowed to go ashore more than move within the port's ISPS area to handle waste management and deliveries. No major crew changes will take place in Visby exceeding some individual cases.

A 81 year old German passengers was missing from the "Aidacara" since Nov 19, 2018, in the Atlantic, 260 miles SE of El Hierro. After a search on board failed to trace him, the Spanish Sea Rescue was alerted and joined the search. Ships in the vicinity were requested to keep a sharp lookout. It was thought theman fell over board.

AIDA Cruises’ AIDAcara berthed in Palamós, Baix Empordà for the first time at the end of September, bringing 1,135 passengers to the Spanish port. Arriving at 10am from Spain’s Port of Valencia, AIDAcara remained in port all day, allowing her guests to visit the town of Palamós, the Jewish quarter of Girona, Besalú, the medieval villages of Pals and Peratallada, Tossa de Mar, the Dalí Museum in Figueres and the Gala Dalí Castle in Púbol. The vessel departed at 7:30pm for the port of Mahon in Menorca. “The arrival of AIDA Cruises at Palamós is the result of the promotional effort made by the institutions grouped in Costa Brava Cruise Ports on the main cruise forums, with the goal of attracting new lines, more calls and more passengers,” said the port in a press release.