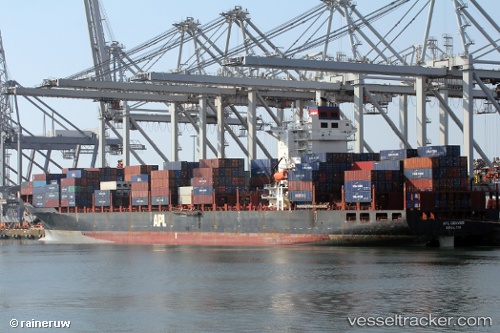 Navios Maritime Containers, a growth vehicle in the container sector based in the Marshall Islands, has announced that it has taken delivery of 3,270-TEU APL Denver, the first of four 2008-built panamax with period charters.Following this acquisition, Navios will control 20 vessels of 84,520 TEU and an average age of 9.8 years, reported the American Journal of Transportation.

The Maritime and Port Authority of Singapore (MPA) continued to coordinate the containment and clean-up efforts of the oil spillage in Singapore’s waters following the collision of the "Wan Hai 301" and the "APL Denver". On Jan 5 a total of 17 vessels and 222 personnel have been deployed. Progress of the clean-up was being made along the western coastlines of Pulau Ubin (OBS Jetty) and Nenas Channel. Some patches of oil were spotted off CAFHI Jetty and also along the shorelines of Pasir Ris Beach, Changi Point Ferry Terminal, Changi Sailing Club and Changi Beach in the early hours of the morning. Contractors were deployed to clean up the affected shorelines. Oil spill response vessels as well as containment booms and spill recovery equipment such as harbour busters and skimmers have also been deployed at the affected areas. The Johor Port Authority (JPA) informed that four anti-pollution craft have been deployed on site, while an oil boom was positioned around the "APL Denver" to contain the oil spill.

Authorities anticipated it would take a week to clean up the oil spill caused by 300 tons Marine Fuel Oil (MFO) 500 CST from the "APL Denver" in the Johor Strait near Pasir Gudang Port. How quickly the clean-up job could be done was also dependent on the weather and the currents. The oil spill did not affect the people in the area, including fishermen neither has it affected the private jetties as well as the Sultan Iskandar Power Station. The port of Johor was operating as usual but vessels could experience delay when berthing at the Container Terminal due to the work to control the oil spill. The quick action by Johor Port Bhd, with the cooperation of agencies in the Pasir Gudang Oil Spill Task Force as well as LPJ, Department of Environment, South Region Marine Department and the Port of Tanjung Pelepas, managed to prevent the spill from spreading over a wide area. Singapore authorities also took swift action to check the spill in the republic's waters. Most of the oil drifted to Singapore waters. An a erial surveillance spotted two patches of oil concentrated along the western coastlines of Pulau Ubin (OBS Jetty) and Nenas Channel.Until the evening of Jan 4, no new sightings of oil has been reported. MPA and its contractors have deployed a total of nine vessels to respond to the oil patches at OBS Jetty and Nenas Channel. Two skimmers and booms have been placed off OBS Jetty and Nenas Channel to contain the oil patches. Reports with photos and video: http://m.appledaily.com.tw/realtimenews/article/recommend/20170105/1027986/EDITOR http://www.nst.com.my/news/2017/01/201871/johor-oil-spill-most-oil-drifted-singapore-waters-video?utm_source=nst&utm_medium=nst&utm_campaign=nstrelated http://www.nst.com.my/news/2017/01/202071/oil-spill-clean-expected-take-week-johor-port https://felixstowedocker.blogspot.de/2017/01/collision-between-container-vessels-wan.html http://demoefe.ikuna.com/187_america/4246112_la-colision-de-dos-barcos-provoca-un-vertido-de-petroleo-en-malasia.html http://news.hsdhw.com/421996 https://www.youtube.com/watch?v=2NO38eaIj44