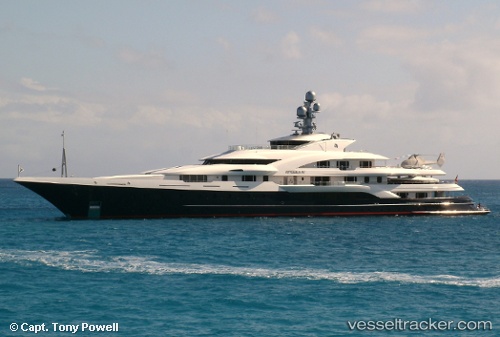 One died after collision of superyacht

One sport fisher aboard the 20-m-f/v "Prowler" has succumbed to his injuries in the UC San Diego Medical Center after the collision with the "Attessa IV" nine miles off Imperial Beach between San Diego and Tijuana, Mexico, on Oct 26 around 7.30 p.m. The "Prowler" had been on its way back to port with 29 persons aboard. The whole starboard side deck was torn off, but the "Prowler" remained afloat and was meanwhile taken out of the water by a synchrolift crane in San Diego. The "Attessa IV" only suffered scratches and remained seaworthy. Two fishermen had been taken off by a Jayhawk, 17 more transferred to shore with boats of the Coast Guard, and 10 were taken off by the "Attessa IV" and landed in San Diego. Also the Coast Guard cutter "Sea Otter" had arrived at 8.45 p.m. and assisted the skipper of the "Prowler" until the ship was safe in port. The investigation into the accident was ongoing.

The "Attessa IV" and a sport-fishing boat collided in the Pacific Ocean approximately nine miles offshore of Imperial Beach near the U.S.-Mexico border on Oct 26, 2018, at 7.50 p.m. injuring 17 people. There were 28 people aboard the fishing boat at the time of the incident near the Maritime Boundary Line. The 65-foot sportfisher "Prowler" suffered extensive damage to the starboard quarter. A Coast Guard Sector San Diego MH-60 Jayhawk helicopter crew and a Coast Guard Station San Diego 45-foot boat were dispatched to respond. The Coast Guard Cutter "Sea Otter" was also diverted to assist. The crews arrived on scene at approximately 8:45 p.m. The Jayhawk hoisted a critically injured passenger and returned to Sector San Diego where awaiting EMS took the man to UC San Diego Medical Center – Hillcrest in critical condition. The RB-M crew transferred 17 passengers, two reporting injuries, from the "Prowler" and took them to Sector San Diego. The remaining ten passengers were transferred to the "Attessa IV" and returned to San Diego, while the captain remained aboard the "Prowler". The "Sea Otter" remained on-scene with the Prowler awaiting commercial salvage. The "Attessa IV" anchored at North San Diego Bay in pos. 32° 43.17' N 117° 12.80' W. The "Prolwer" was meanwhile lifted out of the water. Reports with photo and video: http://www.cbs8.com/story/39368788/yacht-and-sport-fishing-boat-collide-in-the-pacific-near-the-us-mexico-border https://coastguardnews.com/coast-guard-responds-to-vessel-collision-with-29-people-aboard/2018/10/27/ https://www.10news.com/news/10news-exclusive-boat-crash-survivor-recalls-moment-of-impact