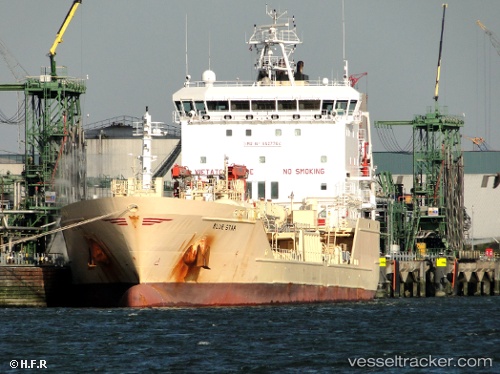 The 'Blue Star' which had run aground on the coast of Ares (A Coruña) docked at a shipyard in Tuzla in the morning of March 30. The tanker had left El Ferrol on March 10, being towed by the tug 'VB Hispania'. The ship will be repaired and not be scrapped, as was first assured by the owner. Repairs had already started at the Navantia Ferrol facilities, but its complete arrangement did not materialize as the owners and the shipyard failed to reach an economic agreement. The steel cutting works and replacement of damaged areas have since being carried out on the class surveyor's marked location. Upon completion of further repairs, a tightness test will be carried out by independent surveyors. The main and auxiliary engines overhauling was being authorized by engineering companies. Damages were noted on propeller, rudder and also in main shaft connections. Repair works were underway. The engine room was heavily buckled at starboard side together with diesel oil storage tanks. The main electric systems, cables, main switchboard connections renewals were under progress. The steel cutting operation has been completed and new steel installment will be carried out by the shipyard teams. Regarding the damaged boiler, incinerator spare parts were provided by the owners. A new set of propeller and rudder unit were being manufactured under the supervision of class surveyor.

The 'Blue Star' left its berth at the Navantia Ferrol Yard, where it had remained since the beginning of February, on March 10 at 10 a.m. being towed by the tug 'VB Hispania' (IMO: 9476018). The convoy got assistance by the tugs 'Ramón Casas' and 'El Hocho' until the outer harbor of Caneliñas. During the recent emergency repairs had been carried out, but the owner and the yard did not reach an agreement regarding the price of its complete repair. The convoy was headed to Tuzla with an ETA as of March 28. Spanish report with photo: https://www.elespanol.com/quincemil/articulos/actualidad/el-buque-blue-star-abandona-el-puerto-de-ferrol-para-ser-desguazado-en-turquia

Tug arrived in El Ferrol for transfer of damaged tanker

The stay of the 'Blue Star' in the port of Ferrol is nearing its end. The tug "VB Hispania" (IMO: 9476018), the largest ship of the Valencian Boluda Towage a subsidiary of the Boluda Corporation - was tasked with the transfer to the Turkey. Among the main candidates as next destination would be the facilities of Sedef in Tuzla, the main Turkish naval company, or those of TVK Shipyard, builders of the "Blue Star" in Istanbul. The tug arrived in El Ferrol on March 7.