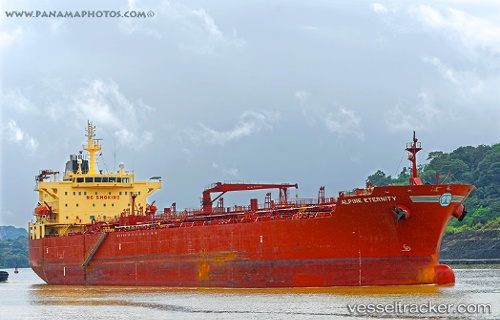 The Maritime and Port Authority of Singapore said on Monday that it has requested the Iranian maritime authorities to investigate an incident last week when Iranian vessels fired shots at a Singapore-flagged tanker in the Gulf. Alpine Eternity, the vessel that came under fire, had collided with an Iranian oil drilling platform in March, which triggered a call from Iran to its neighbours to seize the ship and hand it over to Iran. Singapore's MPA said that it requested its Iranian counterpart prevent future recurrences, as the freedom of navigation and free flow of commerce are of critical importance to Singapore and other countries. "Such interference with navigational rights is a serious violation of international law," it said in a statement, adding that Singapore was deeply concerned by such actions.

(Reuters) - A Singapore-flagged oil products tanker fired at by Iranian craft on Thursday had previously collided with an Iranian oil drilling platform in March and efforts have since been made to resolve the issue, the owner said on Friday. The Alpine Eternity was attacked by a number of small craft in international waters off the United Arab Emirates in the latest escalation in the region. The owner, South Maritime Pte Ltd, and manager, Transpetrol TM, said in a joint statement that the tanker collided with an uncharted object on March 21 in the Middle East Gulf, which was later identified as an Iranian jacket platform. No one was injured and no pollution was spilled. "Since the March 21 incident, there has been a continuous dialogue between the owners/drilling contractor of the offshore structure, and representatives of the vessel and their liability insurers," they said in the statement. "Owners and managers can see no reason why the Iranian authorities should try to seize the vessel, given the advanced state of negotiations and ongoing dialogue with the Iranian counterparts." https://www.zawya.com/story/Tanker_attacked_by_Iranian_craft_collided_with_Iran_oil_platform_in_March_owner-TR20150515nL5N0Y63BVX3/