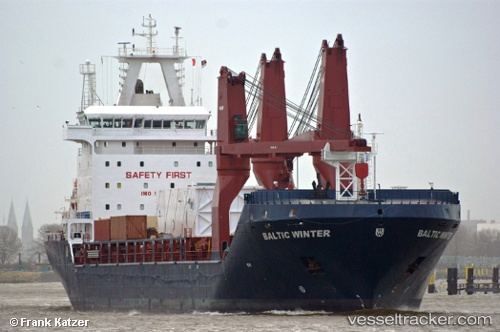 An investigation by the UK’s Marine Accident Investigation Branch into a January 2014 collision between a Rickmers’ cargo ship and a crane barge in the Dover Strait has found that the cargo ship’s watch officer was overly reliant on AIS information displayed on the ECDIS and did not maintain a proper lookout or pay attention to the ship’s radar leading up to collision. On 10 January 2014, the Liberian-flagged multi-purpose cargo ship, Rickmers Dubai, collided with the un-manned crane barge, Walcon Wizard, which was being towed by the tug Kingston in the south-west traffic lane of the Dover Strait Traffic Seperation Scheme. The accident occurred as Rickmers Dubai was overtaking the tug and its tow. Immediately following the collision, the towline caught on Rickmers Dubai and Kingston was towed stern-first through the water until the towline ran free from its tow winch. Walcon Wizard was badly damaged and Rickmers Dubai’s hull was punctured above the waterline. The hydraulic system for the tow winch on board Kingston was also damaged. There were no injuries and there was no pollution as a result of the incident.

On Jan 11 at 3 a.m. the "Rickmers Dubai" being en route from Hamburg to Genoa was in collision with the tug "Kingston", 113 gt (5344437), which was towing the barge "Walcon Wizard" from Southampton, nine miles off Dungeness in the English Channel. The "Rickmers Dubai" passed between the tug and the barge it was towing. The barge suffered some damage and dropped its anchor with the "Kingston" standing by. The Trinity House buoy tender "Galatea" headed down to the barge intending to cut the barges anchor cable so it could continue on its journey. The RNLI lifeboat under the command of Coxswain Stuart Adams also launched at approximately 3am on Saturday 11 January 2014. Once on scene it was established there were no injuries reported and the RNLI lifeboat was asked to stand-by. Later in the day Dover RNLI lifeboat was tasked together with the Trinity tug "Galatea" to take over from Dungeness lifeboat and while they continued to make their way to shore,​ the boat returned to station after the Dover lifeboat arrived.The RNLI Severn class lifeboat, the "City of London II" and the "Galatea" had left the port of Dover shortly before midday and rhad eached the casualty vessels just before 2 p.m. The crew of the tug suffered from tiredness, which resulted in the tow of the damaged vessel being taken up by the RNLI’s lifeboats. After a long day, the crews arrived in Dover just before 11 p.m. The "Rickmers Dubai" went at anchor off Newhaven in East Sussex. The barge was pulled in to Dover in the night of Jan 12 and moored at the Admiralty Pier. Reports with photos: http://rnli.org/Pages/Photograph-Detail.aspx?MainImageUrl=%2fPhotoLibrary%2fTug+and+Barge+-+Daylight+January+2014.jpg http://www.bbc.co.uk/news/uk-england-25703163 http://www.doverforum.com/sea-news/

Floating craft like motor yachts, sailing yachts or catamarans are quite a regular sight on Rickmers-Linie vessels. However, the ferry which Rickmers-Linie carried from Bangladesh to Denmark on board the long-term charter vessel Baltic Winter is remarkable. It is the very first ferry built by a Bangladesh shipyard for European owners and will be put in service by Hundested-Rørvig Færgefart AS across the fjord after which the ferry is named: Isefjord. At a length of 49.80m and a breadth of 11.20m, the ferry’s carrying capacity is 28 cars and 147 passengers. Her two main engines, with 500hp each, allow for a speed of approximately 11 knots. The total weight of the ferry is 470 tonnes. The ferry was built by Western Marine Shipyard Ltd in Chittagong, Bangladesh. After delivery to her owners in February, she was taken on board the multipurpose heavy lift vessel Baltic Winter using its two 400 tonne cranes in early March. The transit to Denmark took six weeks and delivery of the ferry took place on Sunday 14 April at Hundested roads with direct discharge into the waters of the Kattegat. Source: Rickmers Linie