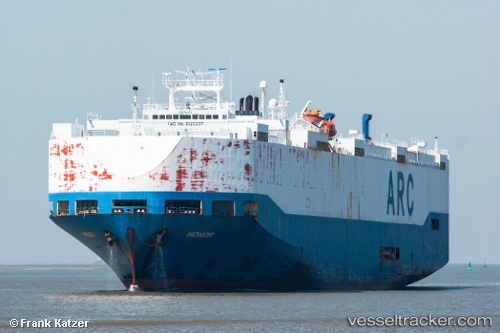 In the afternoon of Sep 4, 2018, the "Honor", coming from Antwerp, was in collision with the tug "Svitzer Marken" upon entering the northern lock in Bremerhaven. One crew member of the tug was severely injured amd had to be taken to hospital. The superstructure of the tug suffered significant damaga as well as the starboard foreship. Two tugs were deployed to assist the entry manoever of the vehicles carrier. The "Svitzer Marken" passed the ships but suddennly changed course and got under the bow of the "Honor". The tug was berthed at the Lloyd Yard Bremerhaven on Sep 5 at 11.20 a.m. The "Honor" suffered a small hole in the hull above the waterline. It safely berthed in the Kaiser Port 2 in Bremerhaven at 3.30 p.m. German report with photo: https://www.presseportal.de/blaulicht/pm/35235/4054103

While the "Honor"'s 21 crew member were safe and well, a number of the cars being transported by the vessel were involved in the blaze according to the Hampshire Fire and Rescue Service. Additional fire crews were airlifted onboard by a UK Coastguard search and rescue helicopter based at Lee on Solent in Hampshire with temperature and gas monitoring equipment to assess the damage. Also a pilot from Southampton Port and a MCA Marine Casualty Officer were to be sent to the vessel to assist the assessment process. On Feb 24 at 9.30 p.m. the ship berthed at the New Cruise Terminal in Southampton. The vessel will remain in Southampton over the weekend. Further updates will be released on Feb 27. Reports with photos and video: http://www.dailyecho.co.uk/news/15116017.Fire_breaks_out_on_car_carrier_after_leaving_Southampton/#gallery1 http://www.heart.co.uk/southcoast/news/local/21-crew-rescued-fire-on-board-car-carrier/#KE3HfeVVOL9YWrGe.97 http://www.itv.com/news/meridian/update/2017-02-25/21-crew-safe-well-after-ship-fire-in-english-channel/ https://pbs.twimg.com/media/C5di6-cWQAI83E-.jpg

In the morning of Feb 24, 2017, at 4.30 a.m. a fire broke out aboard the "Honor" about 50 kilometers northeast of Cherbourg. The ship had left the port of Southampton on Feb 23 at 9.40 p.m. bound to Charleston. Immediately, the "Honor"'s crew set off the CO2 extinguishers and managed to control the fire. There are no injuries among the crew. The vessel did not request assistance but was still under the supervision of the CROSS Jobourg. The ship sailed back to Southampton under surveillance. he Center for Maritime Operations (COM) of the Maritime Prefect of the English Channel and the North Sea, based in Cherbourg, has deployed the emergenvy tug "Abeille Liberté" from Cherbourg, as well as the Cayman helicopter of the French Navy for this purpose. In the afternoon the vessel was sailing in legs southwest of Isle of Wight. Initially it was planned to anchor off the Isle of Wight while the fire damage was assessed, to determine whether it was safe for the ship to return to Southampton Port. The cargo deck, on which the fire had erupted, was sealed, and the crew kept monitoring the situation in the cargo area.