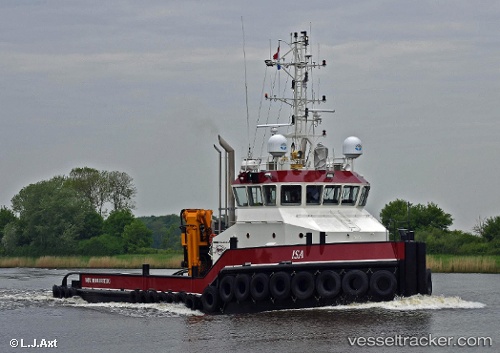 Man collapsed on board

In the evening of Oct 4, 2018, a crew member of the "Isa" fell serioulsy ill. At 7.35 p.m. the barge "Bodo Constructor" informed the MRCC of the DGzRS that the man had suddenly collapsed on board and suffered further injuries thereby. The tug was four miles off Büsum at that time. The lifeboat "Theodor Storm" from Büsum attended with two doctors and two medicals on board. The victim could be resuscitated by other crew members and was conscious when the lifeboat arrived and droppen the medical teamm off. The tug, escorted by the lifeboat, headed to Büsum, and the man was medically treated underway. An ambulance transported him to hospital after the arrival in the port.

The operation to salvage the wreck of the £1.8 million luxury yacht "P6T2" by the "Isa" and its crane barge has been suspended after it was discovered that the vessel has broken up on the sea bed. Despite regularly monitoring the vessel’s location it was believed that a period of unsettled conditions last weekend may well have contributed to the vessel recently breaking up. The decision has been taken late in the afternoon of Dec 20 by the Salvage Master in consultation with the Harbour Master and agreement with the vessel’s insurance company. Despite two days of 24 hour diving operation around the location of the vessel and despite salvaging some items, including one complete engine, closer examination of the area indicated that the boat has now broken up on the sea bed, making it impossible to retrieve the entire vessel. The salvage vessel has returned to St Helier Harbour late in the afternoon with some of the items retrieved from the seabed. The salvage vessel and its team were due to leave the Island in the afternoon of Dec 21. Ports of Jersey has remained in close contact with the environment department throughout the process and have worked with Oil Spill Response Limited in the UK to monitor potential environmental impact. The assumption now an engine has been located, is that fuel has been lost. The fact there have been no reports of surface oil, indicated that any oil has dispersed and broken down. Report with photo: https://jerseyeveningpost.com/breakingnews/2017/12/20/sunken-yacht-has-broken-up-on-seabed/#C1Pdvt7CXRpKP4IQ.99

A 20-man salvage team, including 14 divers, a salvage master, a barge master and a dive master arrived on Jersey in the evening of Dec 17, 2017, and were now co-ordinating the salvage operation for the luxury yacht "P6T2" alongside officers from the Marine Services Team at Jersey Harbours. The "Isa" with a 30-metre heavy lift barge in tow left the port of Antwerp on Dec 16 and expected in the island port on Dec 18. The yacht, which sank in St Aubin’s Bay after striking the Ruaudiere Buoy and was later moved to deeper water off St Brelade’s Bay, still has about 2,000 litres of diesel in its tank. The greatest risk of a fuel leak is during the lifting of the vessel. The salvage operation was due to begin on Dec 19, when the salvage vessels were expected to drop anchor at the scene. The raising of the yacht was due to start on Dec 20 and was expected to take between one and two days. The complex and delicate operation was involving two teams of divers and major assets brought into the Island to assist with the recovery process. This includes a 200-tonne crane and decompression chamber on board the lift barge. For the duration of the operation a maritime exclusion zone was in force, with the western approaches to all commercial and leisure traffic closed as from 8 a.m. on Dec 19. Similarly, a drone exclusion zone will also be in place as from the mornin. Two people were rescued by firefighters on board the service’s inshore rescue boat after the vessel went down within minutes of striking the buoy on the evening of Nov 17. The accident occurred just hours after the RNLI closed the St Helier lifeboat station and took the George Sullivan all-weather lifeboat to Poole following a long-running dispute with the local crew. Report with photo: https://jerseyeveningpost.com/news/2017/12/19/salvage-team-of-20-to-raise-18m-yacht/#ED92zVOZfF2MHlkJ.99