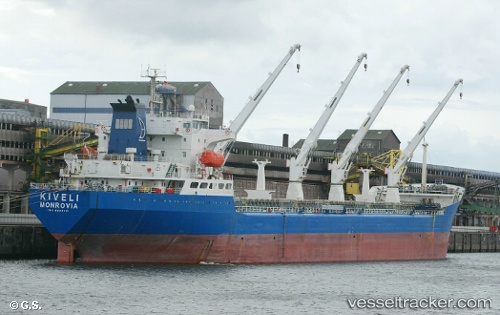 The 'Afina I' and 'Kiveli' were still entangled as of March 28, while the salvage work was continued. Actually the cargo of the 'Afina I', which suffered the most serious damage, was being lightered in order to get the gash higher in the water, so that there will be less water ingress when ships are decoupled. For this purpose, a barge with a mobile crane on deck was brought in which started digging the iron ore cargo onto lighters. For the time being, the 'Kiveli' must remain stuck in the hull to keep the breach sealed. The tugs 'Vernicos Sifnos' and 'Hermes' held the vessels in their position 36° 30.01' N 023° 0.14' E in the Vatika Bay. Video: https://www.youtube.com/watch?v=mRyILE3JK_I

On March 14, the salvage company Lyboussakis Salvage & Towage managed to separate the two bulk carriers 'Kiveli' and 'Afina I'. Despite water intrusion, both ships remain afloat at the collision site just over 10 nautical miles northwest of the Greek island of Kythera. No injuries were reported among the crews of the two ships. No pollution occurred after the collision. The salvage company had feared that the hole in the port side of the 'Alfina I' was so large that the ship would sink if the two vessels were separated, so they were towed to calm waters at the Neapoli Voion Anchorage. At 4.15 p.m. the 'Kiveli', attended by the 'Dolphin I' and 'Hermes', was moored in the Vatika Bay in pos. 36° 28.86' N 023° 0.21'14.3 E. Four more tugs were involved in the response. The Greek authorities were investigating the cause of the collision. Greek report with photos: https://arxipelagos.gr/%CF%83%CE%B7%CE%BC%CE%B5%CF%81%CE%B9%CE%BD%CE%AD%CF%82-%CF%86%CF%89%CF%84%CE%BF%CE%B3%CF%81%CE%B1%CF%86%CE%AF%CE%B5%CF%82-%CE%B1%CF%80%CF%8C-%CF%84%CE%B7-%CF%83%CF%8D%CE%B3%CE%BA%CF%81%CE%BF%CF%85/?fbclid=IwAR3HnnZX0C18XtBJpSOxAWzqHjYG4JtaFQ_h1EBVbHow-97SLcVXmmJL6sY

The 'Kiveli' was in collision with the bulk carrier 'Afina I' in the morning of March 13, 2021, west of Kythira island off the southern Peloponnese. Both ships were proceeding in opposite directions when the accident happened. The 'Afina I' suffered a hull breach and water ingress when the 'Kiveli' hit, so the vessels remained coupled to avoid the danger of sinking. She was en route from Novorossiysk to Bilbao with 24 crew members and a cargo of scrap metal on board, among them one Georgian, and 23 Filipinos. The 'Kiveli' had on board a cargo of fertilizer and 18 crew members, among them 16 Georgians and two Russians and was underway from Casablanca to Varna. The tugs 'Hermes', 'Karapiperis 18' and 'Vernicos Sifnos' as well as five vessels of the Coast Guard and boats of the Port Authority were called to the accident site. Report with photo and video: https://www.tovima.gr/2021/03/14/society/kythira-se-ekseliksi-oi-ereynes-gia-ti-sygkrousi-ton-dyo-ploion/