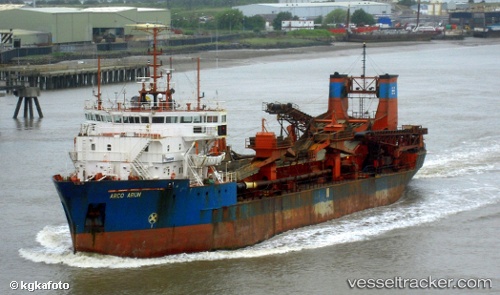 The Gravesend’s RNLI lifeboat was called out on Nov 19, 2015, to reports of a crewman aboard the "Arco Arun" who had sustained an injury to his hand. The boat launched at 10 p.m., proceeding to the dredger and transferred to volunteer crew members aboard to assess the condition of the casualty. Crew members discovered the casualty had fallen and sustained a deep cut to the left wrist, after being assessed by crew and treated, it was decided a trip to the hospital would be needed. The casualty was taken to Royal Terrace Pier where they were transported to hospital in a taxi. Report with photo: http://rnli.org/NewsCentre/Pages/Gravesend-RNLI-crew-treat-injured-crewman-aboard-a-dredger1.aspx

The UK's Marine Accident Investigation Branch (MAIB) is looking into why 14 yachts moored outside Medway Yacht Club in Kent were struck and badly damaged by a dredger passing too close by in the fog. Luckily the Medway Yacht Club said there were no people on board the boats at the time. The 98.55m suction dredger (3476gt) Arco Arun allegedly struck the vessels and then radioed Medway Vessel Traffic Services that contact had been made “with a couple of yachts”. Its owner, Hanson Marine, told Maritime Journal that it is currently investigating the incident and an investigation has commenced with the MAIB. David Weeks, spokesperson, Hanson Marine, told MJ: "We have been liaising closely with the yacht club and the yacht owners but we don't have any further information as yet." When asked, he did point out that there was a pilot onboard at the time, but the conditions were foggy. Medway Yacht Club meanwhile said that the yacht owners are making individual individual claims, but that eight yachts were dismasted. The damage is expected to run into hundreds of thousands British pounds. Colin West, Vice Commodore, Medway Yacht Club, said to MJ: "There were no witnesses but one yacht owner was asleep on his yacht at te time (not one of the ones involved in the incident) and heard the incident. We are working with Peel Ports to investigate the incident, but the MAIB is also involved." The MAIB is not expected to file its report into the incident for a few months at least. Source: http://www.maritimejournal.com/news101/industry-news/dredger-damages-medway-yachts

Peel Ports launched an investigation after the "Arco Arun" damaged 14 moored yachts on the River Medway near the Medway Yacht Club in the morning of Sep 28. The incident took place near the Medway Yacht Club, Lower Upnor around 6:30am when there was a thick fog covering the river. No one was believed to have been on board any of the yachts at the time so there were no injuries, but some of the yachts were badly damaged and had broken masts. Peel Ports were investigating the incident in-line with the appropriate protocols and with the relevant parties. Report with photos: http://www.kentonline.co.uk/medway/news/dredger-damages-yachts-in-early-24283/