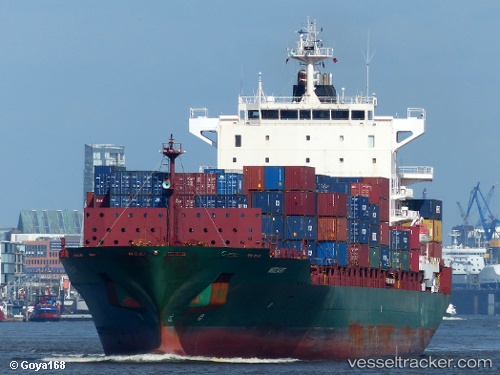 Ship to be repaired in Cape Town after pirate attack

The 'Mozart' sailed from Port Gentil after temporary repairs were completed, and headed for Cape Town for permanent repairs. The vessel arrived at the MPT Terminal on Feb 5 at 9.20 a.m.

Three Turkish crew members of the 'Mozart' returned to Turkey on Jan 30. The Fourth Captain of the Mozart, Furkan Yaren, chief engineer Ilhan Suha Tatlıgül and Bahadir Yeşilalan, the oiler in the engine room, arrived at Istanbul Airport. Yaren had injured his leg in the attack. Tatlıgül explained that they locked themselves in the helm station during the attack and the pirates shot at doors trying to get in. They hit the doors with a sledgehammer for six, seven hours. At that time, the Azerbaijani colleague died. Yaren fell from a height and was slightly injured. Then they took the other men hostage. They didn't take him because they couldn't find him. Then they fled, leaving two wounded. Report with photo: https://www.dailysabah.com/turkey/sailors-onboard-ship-attacked-by-pirates-arrive-in-turkey/news

All 15 crew members of the 'Mozart', which remains anchored at Port-Gentil, Gabon, were together, in good health and uninjured, according to the ship's Turkish technical operating company on Jan 28. "Boden Shipping communicated with the crew members of the container ship Mozart, which was hijacked off Sao Tome on Jan. 23, 2021. Boden Shipping and Boden Shipping's partners in Borealis Shipping continue to make every effort to ensure the fastest release of their teammates, who are their first and only priorities, and continue to be in constant communication with the families of the abducted sailors. No additional comments would be made on the subject to protect the safety and health of the crew and their families." Following the attack, the ship anchored at the nearby Port-Gentil on Jan 24 , but with only three of its Turkish crew members on board. who were in good condition according to Turkey's Embassy in the capital Libreville.