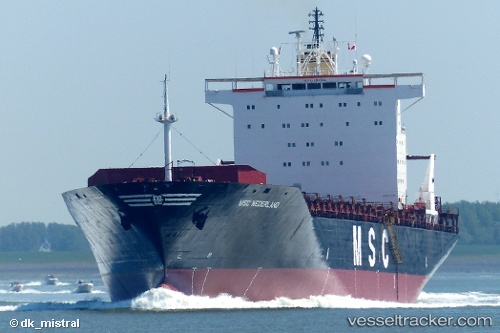 At least eight pirates tried to board the 'MSC Nederland' off Togo on Jan 13, 2020, while anchored in position 06 05 09N, 001 19 03E, three miles off the port of Lome. The captain of the vessel issued a distress call stating that at least eight people in a boat alongside the vessel were throwing ropes and hooks and were climbing onward. All crew members safely mustered in the citadel. A Togolese navy patrol vessel came alongside the vessel, within 40 minutes of the distress call, but nearly four hours later, the navy had not boarded the vessel. Naval officers had asked the crew to leave the citadel and lower the pilot ladder, which the crew refused to do until the next morning. The boarding attempt of the pirates was unsuccessful, and the crew and the vessel were safe and secure. The ship, whoich had sailed from Conakry on Jan 9, berthed in Lome on Jan 14 at 12.50 a.m.

During the cargo operations of the "MSC Nederland" in Puerto de la Luz, Las Palamas, six containers fell onto the León y Castillo quay from the ship and were damaged. The ship left Las Palmas on Dec 2, next being bound for Agadir, ETA Dec 3. Spanish report with photos: http://www.laprovincia.es/sucesos/2017/12/01/cocinero-barco-fallece-caer-borda/1003873.html

US investigators believe human error is the underlying cause of the collision between the "Elka Apollon" and the "MSC Nederland" on Oct 29, 2011, in the Houston Ship Channel.