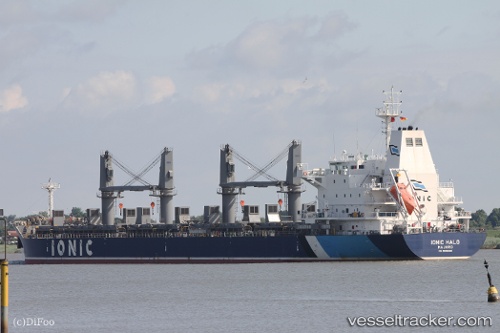 On April 7, 2020, the pilot of the 'Ionic Halo', enroute from Arroyyo Seco to Las Palmas, had to be medevaced in the area of ​​Puerto de La Plata. At dawn, the Prefecture was summoned to assist the 64-year-old man who showed symptoms such as high blood pressure, paralysis and an inability to speak. A doctor from the force's Department of Health was consulted by radio and indicated that the pilot should be evacuated immediately. The Coast Guard vessel 'GC-73 Cabo Corrientes' ws deployed to the ship, anchored in the port of La Plata, nine kilometers from the shore and arrived one hour later. A doctor was disembarked and evaluated the patient on board, verified the symptoms and stabilized him. Meanwhile, rescuers placed the patient on a stretcher and, with the help of an on-board crane, managed to transfer him safely onto the boat where the doctor assisted him further. An ambulance was waiting at the port, which took him to the Horacio Cestino hospital in Ensenada. Report with photos: https://www.infobae.com/sociedad/2020/04/07/video-prefectura-evacuo-a-un-hombre-que-sufrio-un-acv-a-bordo-de-un-buque-en-el-rio-de-la-plata/

On June 29, 2016, around 1 p.m. the "Widor" allided with the "Ionic Halo" while unmooring in the port of Brake. When the ship which was berthed behind the bulkcarrier at the South Quay abd turned towards the fairway, it was caught by currents and pushed against the stern of the "Ionic Halo". Obviously the 68 year old Lithuanian master had misjudged the strength of the outgoing tide. The cargo ship scraped the stern with its port side and suffered damage at the cargo hatches and a deck crane. Hydraulic fuel leaked out, but did not spill into the Weser. It then backed to its former berth for investigations. The bulkcarrier, which had only suffered slight damage at the stern, left the port short before midnight the same day with an ETA at Riga as of July 2, 5 p.m.. The "Widor" was allowed to sail on June 30 after the damaged hatch covers were fixed, and left the port at 6.15 p.m. bound to Fredericia. It had loaded 2600 tons animal food. As the ship suffered a gear damage, it had to anchor off the Oste for troubleshooting and finally reached Fredericia on July 2 around noon. German report and video: http://www.nwzonline.de/wesermarsch/blaulicht/ebbstrom-drueckt-kuemo-an-stueckgutfrachter_a_31,0,1964132908.html https://www.facebook.com/roland.bolles/videos/1103388499731553/