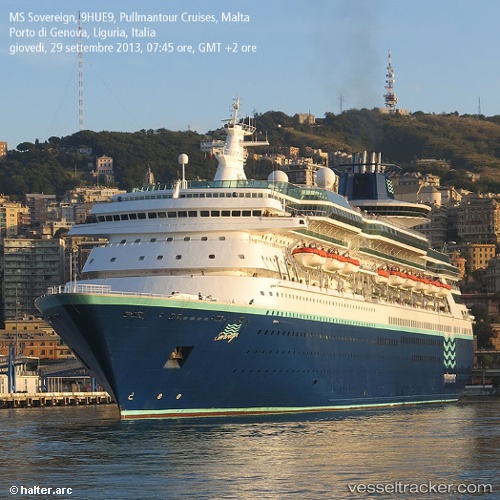 Employees or contractors hired by Royal Caribbean - which has a 49% ownership in Pullmantur - were involved in removing equipment from and dismantling the interiors of two of the companies’ cruise ships, the 'Monarch' and the 'Sovereign' which were currently berthed at the cruise port of Naples, Italy (Stazione Marittima – Terminal di Napol). A large amount of equipment is reportedly being removed. The interiors of both ships were essentially being dismantled in a huge undertaking where there were around 1,500 pallets being assembled to ship the items from each of the ships. According to witnesses, everything of value was being removed from the ships, including artwork and navigational and electrical equipment. Workers were dismantling the theater including the LED wall on the 'Monarch', which projected show backgrounds as well as stage lighting and other production equipment. The crew is being kept in the dark regarding the plans for the future of the company. Pullmantur’s third ship in its fleet, the 'Horizon', was currently off of the coast of Mumbai where it disembarked Indian crew members from both Pullmantur and Azamara. There were rumors that all of the Pullmantur ships will be going to scrap. All three ships, the 'Sovereign' (built in 1988), 'Horizon' (1990), and 'Monarch' (1991) were relatively old and put up for sale – the 'Monarch' for $125,000,000 and the 'Horizon' for $65,000,000. Last week Pullmantur canceled all cruises through November 15th and was planning to put its three ships into cold storage. Report with photo and video: https://www.cruiselawnews.com/2020/06/articles/disease/is-pullmantur-cruises-ending-operations/

Cruise ship headed to Gibraltar for repatriation of crew

The 'Sovereign' which has been docked in the port of Malaga since March 20, has left for Gibraltar on May 17, 2020, with almost 300 crew members on board. During the stay in Malaga, maintenance and cleaning of the ship have been carried out, time that the crew has used to donate more than ten tons of food for citizens. Pullmantur will carry out the repatriation of its crew from Gibraltar, in an operation organized by the company itself. Thus, for crew members from Latin America, a charter flight is being organized from Gibraltar to Barbados and from there to their home countries. For the rest of the crew, different scenarios were being worked on within this repatriation operation. After disembarking the passengers in Cádiz, the port of Malaga was the first alternative to dock.