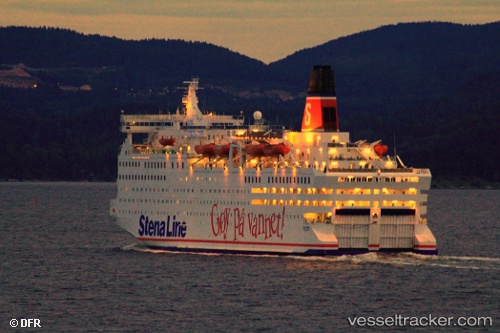 Following the closure of the ferry route between Frederikshavn and Oslo, the Stena Line saw a new possible assignment for the 'Stena Saga'. Within a couple of weeks the ferry which was llaid up in Uddevalla on April 3 could be converted into a hospital ship with 520 places. On March 19, Stena Line announced that as a direct consequence of the corona virus, the service between Oslo and Frederikshavn, which had been served since 1994 was operated by the 'Stena Saga' would be closed. The tough situation forced the company to make the decision as the route was largely dependent on passenger traffic and the important high season in the summer. The company could simply not afford to wait and hope for the next summer. The subsidiary Stena Roro took over the vessel and was commissioned to find a new use for it. . Stena Roro already has extensive experience in building hospital vessels through the ongoing construction of the 'Global Mercy' for the organization Mercy Ships. They have developed a design in which within 2-3 weeks the ventilation system can be rebuilt, alarm systems and communication systems installed and also the interior to suit it can be constructed. The crew can be separated from patients and take other necessary measures. It was not intended for patients to receive intensive care on board, but rather the ship could relieve the hospitals with patients who do not need intensive care with some form of aftercare. However, Stena Roro has not yet received an order for such a ship.

Stena Saga laid up after closure of route Frederikshavn-Oslo

After more than 40 years, Stena Line now has permanently closed the route between Frederikshavn and Oslo. This was a consequence of the corona crisis and the prospect of losing the entire summer season this year. 30 Norwegian employees lose their jobs. The Frederikshavn-Oslo route depended almost entirely on passenger traffic and the important peak season in the summer. Stena said it could simply cannot afford to wait and hope for next summer. The 'Stena Saga' made its last trip from Frederikshavn to Oslo on March 14 and was laid up in Gothenburg on March 16 at 7 a.m.

Two people were rescued in the outer Oslofjord assisted by the "Stena Saga". The two in a recreational boat had to be assisted by the rescue boat late on Oct 12, 2019. Vidar Løkkemoen and his brother who were on their way home to Porsgrunn from Fredrikstad, had got in distress after a wave broke over the boat, and within a short time, the engine compartment filled with water. At 11.15 p.m. the MRCC in Southern Norway issued an alarm after being called by two people i. The "Stena Saga" on her way from Oslo to Denmark had previously noticed a vessel they thought could be the boat in question and chose to turn around.. When the ferry arrived, barely 20 centimeters were left before the boat was submerged. The two on board were rescued by the lifeboat 'Horn Rescuer" and it was towed back to Fredrikstad. at 2 a.m. despite waves up to three to four meters. Report with photos: https://www.vg.no/nyheter/innenriks/i/zGebQ4/to-berget-fra-forlis-i-ytre-oslofjord-fikk-hjelp-av-stena-saga