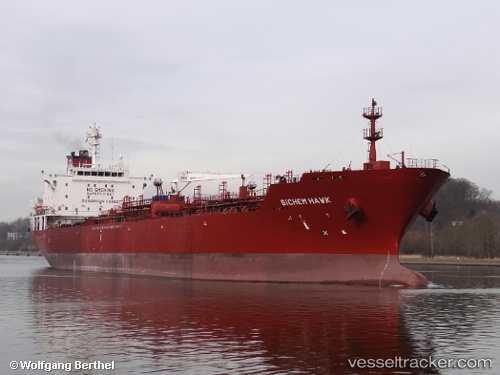 Near collision in Spijkenisse

On May 11, 2020, a sailing yacht was disabled and threatend to drift into the course of the approaching 'Team Hawk' on its way from Dordrecht to Rotterdam on the Oude Maas near the Spijkenisser Bridge. One of the two assisting tugs, the 'En Avant 7', was allowed to release from the tanker between Hoogvliet and Spijkenisse. It sheltered the yacht while the tanker was passing by. Then the tug took the boat in tow to a nearby lock. Report with video: https://www.zeilen.nl/nieuws/actueel/sleepboot-voorkomt-aanvaring-zeilboot-en-tanker/

The 'Team Hawk' with a crew of 20 on board was in collision with the French 22-meter-fishing vessel 'California' on Dec 14, 2019, at 5.20 p.m. in the English Channel South of Falmouth nine miles from Lizard Point. The tanker was on route from Falmouth to New York. The fishing vessel with a crew of five suffered slight damage to its upper bow. The CROSS Corsen established communications with the fishing vessel. It intended to return to Roscoff on Dec 17. At the time of collision, the fishing vessel was not fishing, rather it was proceeding slowly at a speed of five knots. The tanker suffered a hole of around 50x100 centimeters size with ensuing water ingress, and the pumps were being used to cope with the flooding. DCPSO, Duty officer DFT/MAIB, Duty surveyor, Harbour and Enforcement agencies were aware of the situation. The vessel anchored in position 50 06 32 N, 005 03 00 W, about 2.5 miles from South Pendennis point off Falmouth, waiting for an inspection to take place the next morning.

Tankers had to leave La Coruña in emergency