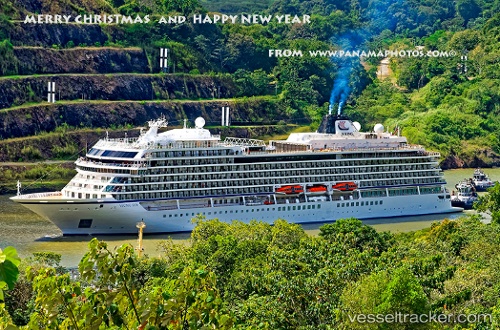 The 'Viking Sun' has arrived in the Bay of Gibraltar on April 10 to disembark seven passengers and one crew member, all of whom were of Canadian nationality. The eight were transferred at sea and ferried to land, where they will catch a BA flight to London before travelling home to Canada. The transfer, which was announced earlier this week, followed a request from the Canadian High Commissioner in London. There were no cases of Covid-19 on board the 'Viking Sun' and the ship has submitted a clear maritime declaration, therefore she was clear to enter port waters to conduct the operation in the latest in a number of exemptions granted by the Gibraltar Port Authority on humanitarian grounds, with routine cruise calls banned under the Covid-19 lockdown regulations.

The US Coast Guard medevaced a 68-year-old woman from the 'Viking Sun' approximately 225 miles south of San Diego on Jan 1, 2020. The crew of the 'Viking Sun' contacted Coast Guard Sector San Diego Joint Harbor Operations Center watchstanders at approximately 8:20 a.m. requesting assistance for a passenger who was displaying symptoms of a stroke. Watchstanders launched a Coast Guard Air Station Sacramento C-27 Spartan crew and a Coast Guard Sector San Diego MH-60 Jayhawk helicopter crew with a San Diego Fire-Rescue Department Special Tactics and Rescue (STAR) Team paramedic aboard to assist. Once on scene, the Jayhawk crew lowered the rescue swimmer to the cruise ship to assess the patient. The helicopter crew then lowered a rescue basket to hoist the patient into the helicopter and transported her to Scripps Memorial Hospital La Jolla just after 12:40 p.m. The patient was reported to be in stable condition.

On Feb 10, 2019, the "Talcahuano" medevaced an American passenger of the "Viking Sun" off the island Santa Maria, in the commune of Coronel. The patient, identified as Sheila Eaton, aged 66 years, jad suffered a head injury and was cared for by the paramedics of the ship before being taken off in complicated conditions due to strong wind. Only after several attempts and after 1,5 hours she waas aboad the "Talcahuano" and taken to Coronel Bay together with her husband and a doctor of the cruise ship, from where she was transferred to a hospital for further diagnosis and treatment. Spanish report with photos: http://www.login.cl/noticias/9201-armada-evacuo-a-pasajera-estadounidense-desde-crucero-en-las-cercanias-de-coronel