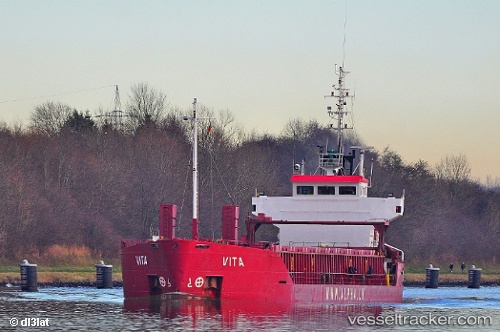 On Sep 23 the owner of the "Vita" presented a detailed plan of action regarding the planned repairs. He also announced to the Maritime Prefecture of the Atlantic that he planned to finish the work by 5:30 p.m. In view of these factors, the Maritime Prefect extended the authorization to anchor the vessel in Brest until 11.30 p.m. As repairs were carried out as planned, thanks to favourable weather conditions, tests were carried out in the presence of an inspector of the classification society as required by international regulations. At the end, the "Vita" sailed around 10:30 p.m. and resumed its route to the port of Pasajes. She dropped anchor off Pasajes on Sep 28 at 8 a.m. French report with photo: https://www.meretmarine.com/fr/content/apres-son-remorquage-par-labeille-bourbon-le-cargo-vita-repart-de-brest

Ship inspected at its anchorage

On Sep 22, the Ship Safety Center (CSN) of Brest conducted an inspection of the "Vita" at its anchorage off Brest which did not lead to the detention of the vessel. In order to carry out an accurate assessment of the damage to the propulsion system and the necessary repairs, the shipowner dispatched technicians and equipment on board. In conjunction with the port authority, the Maritime Prefecture of the Atlantic asked the owner to present a detailed plan of action regarding the planned repairs before 23 at 08:00 a.m. The current situation at the anchorage was only a temporary measure.The ship had on board a non-hazardous cargo - 3560 tons of steel coils - and nine crew members.

On Sep 19, 2017, at 7 p.m. the French emergency tug "Abeille Bourbon" (IMO: 9308687) was deployed from Brest to assist the "Vita" which had suffered engine damage 38 miles NNE of Ouessant in the morning around 8 a.m. The bulk carrier was carrying 3,500 tons of steel sheets and bound from Bremen to Pasajes. The crew of nine tried in vain to repair the damage, probably a failed fuel pump, so the tug was called to take the ship in tow. It pulled the vessel to Brest during the night hours, arriving there in the morning of Sep 20. Around 9 a.m. also the French port tug ""Clairvoyant" (MMSI: 227006710) joined the convoy during mooring operations.