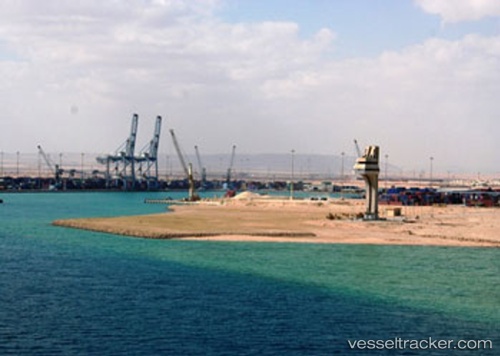 China Harbour Engineering Company (CHEC) started on Tuesday the main phase of the construction of a new terminal basin in Sokhna Port south of the Suez Canal northeast of Egypt. The project was assigned to CHEC by the Sokhna branch of the Emirati corporation DP World, the main investor and container operator in the port located at the Gulf of Suez. At a launching ceremony, CHEC said it will deliver the “Basin 2” project in fewer than 12 months ahead of the deadline.

DP World Sokhna recently welcomed the largest bulk cargo vessel to ever arrive to the port and enter the Red Sea, said a press release from the company. Known as a capesize vessel, the M/v Seafarer originally came from Malta carrying steel cargo weighing more than 140,000 MT.

Deputy Head of Suez Canal Economic Zone Admiral Abdel Kader Darwish announced that the new navigation line with Maersk is now operational. This is considered a great step towards boosting investments in Port of El-Sokhna in cooperation with DP World Sokhna, Darwish said. The celebration held Wednesday represented the crossing of the first Maersk-affiliated container ship. Maersk announced that 450 container ships will cross through the canal without fees for the occasion of the launch of this new navigation line. Maersk has plans to launch another new navigation line this water channel will have two container ships permanently residing there and has the capacity to allow four ships to pass through per month. Source: Daily News Egypt