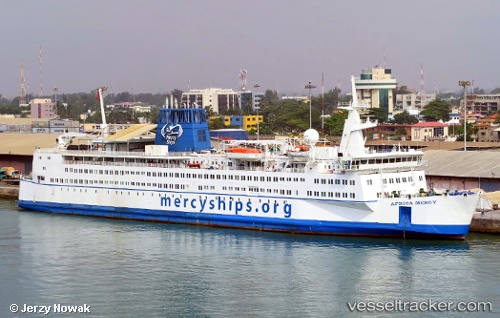 he Africa Mercy hospital ship services the needy in some of the most devastated countries in West Africa, such as Sierra Leone and Togo. Mercy Ships is a global charity that has operated a fleet of hospital ships in developing nations since 1978. They have worked in about 55 developing nations, providing services valued at roughly $1 billion and treated about 2.6 million direct beneficiaries through the ships and services on the ground. Africa Mercy, which has been operating from an old, converted ship, servicing patients for many years, is the only ship in use at this time. A more up-to-date ship is sorely needed and an event is being planned for Sept. 14 to raise funds for that purpose.

The hospital ship Africa Mercy, operated by Mercy Ships, has docked in the port city of Cotonou, Benin, to begin a ten-month season of service. During this time, Mercy Ships will provide free specialized surgeries and health care services to the West African nation’s people. Benin is one of the least developed countries as ranked by the United Nations Human Development Index, with a life expectancy of only 59 years. Access to medical care remains beyond the reach of many, with only six doctors for every 100,000 people and a population of 10.6 million. The Africa Mercy arrived in Benin after two years of service in Madagascar and was welcomed into port by a crowd of well-wishers including the First Lady of the Republic of Benin. The world’s largest civilian hospital ship will build on work done during its five prior visits to Benin, the last of which was in 2009. http://www.maritime-executive.com/article/mercy-ship-arrives-in-benin

Mercy Ships, which provides free live-saving surgeries for people where medical care is nearly non-existent, uses hospital ships to sail into the harbors of remote countries to perform these operations. As they sail through international waters, their vessels must comply with official safety standards under IMO regulations. Included in these regulations is the requirement to sail with an approved Voyage Data Recorder (VDR) onboard.The Africa Mercy, currently the largest civilian hospital ship in the world, was built in 1980 and carried a first generation VDR which eventually was unsupported by the makers. Netwave supported Mercy Ships with a new VDR installation, making sure the vessel remained compliant to the regulations.