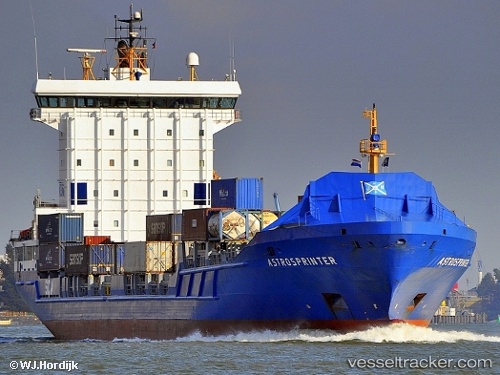 Container ship not at fault in collision

The "Astrosprinter", which had been in coillsion with the former pilot schooner "No. 5 Elbe" (MMSI: 211407690) on the Elbe on June 8, has left the port of Imminham again on June 11 at 7.15 a.m. and was now underway to Klaipeda with an ETA as of June 13, 10 p.m. When the sunken schooner would be raised was still unclear and discussed with the insurance. Meanwhile it became clearer that the accident was a fault on the sailing ship's side which was on the wrong side of the Elbe fairway. The master of the "Astrosprinter" in vain had tried to contact the vessel via VHF, and also other ships had been aware of the arising danger. On june 11 about 1,3 tons of diesel fuel were pumped out of the sunken wreck. The Schwinge river remained barred off with oil booms from the Elbe so no ship traffic was possible here for the time being. A floating crane of the Taucher Knuth company already removed part of the rigg and masts. Photo: http://www.shipspotting.com/gallery/photo.php?lid=3016117#

On June 8, 2019, the "Astrosprinter" was in collision with the former pilot schooner "No. 5 Elbe" on the Elbe. The schooner was undereway with 43 passengers on board when the collision occurred at Stadersand at 2.30 p.m. Due to another sligh accident four rescue ships were only 500 meters away and were on scene within three minutes. MANV-alert was raised, and the fire brigade attended with 150 forces from Stade and Lühe, supported by the German Life Saving Society (DLRG), doctors and medicals of the German Red Cross. A helicopter was called and transported one person with serious injuries into a hospital in Hamburg-Altona. The fire brigade Stade attended with the fire boat "Henry Köpcke" and transferred personnel on board the schooner to check the injured, while the ship was founderig fast. The "Elbe 5" was towed by a DLRG-boat to the shore of Stadersand where the passengers were evacuated. Short time later the schooner sank in the estuary of the river Schwinge with only the masts and part of the starboard bulwark remaining visible. Eight persons suffered slight injuries. An oil boom was laid out around the wreck. The ship had just been restored for 1,5 million Euros at the Hvide Sande Shipyard for eight months and returned to Hamburg last week. The "Astrosporinter" was underway from Hamburg to Immingham and dropped anchor on the Elbe in pos. 53° 53.11' N 009° 12.26' E. She continued the voyage after investigations on June 9 at 3 a.m. with an ETA at Imminham as of June 10 at 2.30 a.m. after investigations were completed. The ship had suffered only slight damage when the schooner sailed in front of its bow. German reports woth photos and video: https://www.ndr.de/nachrichten/hamburg/Bestuerzung-nach-Havarie-der-No-5-Elbe-,lotsenschoner140.html https://hafenmeldungen.blogspot.com/2019/06/080619-schockierende-fotos-der-kollision.html https://www.ndr.de/nachrichten/hamburg/Havarie-auf-der-Elbe-No-5-Elbe-gesunken-,lotsenschoner140.html https://www.ostsee-zeitung.de/Nachrichten/Panorama/No-5-Elbe-sinkt-bei-Stade-Segelschiff-kollidiert-mit-Containerschiff https://www.tageblatt.de/lokales/blaulicht_artikel,-Segelschiff-kollidiert-mit-Containerschiff-bei-Stade-_arid,1445875.html https://www.kreiszeitung-wochenblatt.de/stade/c-blaulicht/chemie-grosseinsatz-bei-synthopol-und-untergang-eines-segelschiffs-auf-der-elbe_a143024#gallery=null

A broken bow line, a damaged gangway and a damaged bunker hose were the consequences of an overtaking maneuver on the Kiel Canal off the bunker pier of Total on Mar 27, 2012. The westward moving, Cyprus-flagged container m/v "Transanund" had overtaken the slow-moving container m/v "Heinrich Ehler" at 00.50 a.m. The 142-meter long ship produced as much suction and swell that the tank m/v "Wappen von Berlin" violently got into longitudinal motion. A bow line broke, and the gangway slipped over a bunker hose. Investigations were launched against the second officer of the freighter because of the suspicion of inappropriate speed. He had to pay a security deposit. The investigation by the Water Police were continuing.