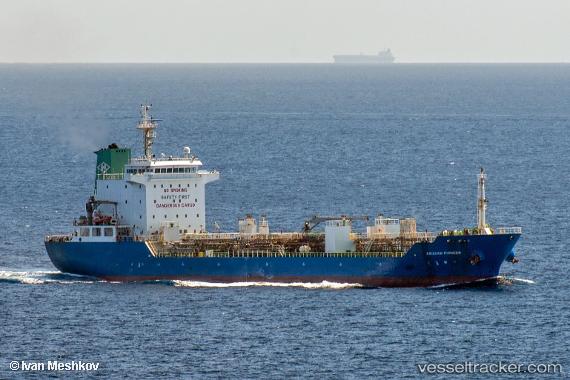 The 'Awasan Pioneer' with a cargo of caustic soda has interrupted the voyage to Kendawangan in the Ketapang Regency, southwest Kalimantan on Feb 2, 2020. The ship was ordered to moor at Pontianak anchorage, western Kalimantan, and dropped anchor off Pontianak in pos. 00° 2.71' N 109° 0.56' E after having been put under quarantine. Seven of the 22 crew members were reported to show coronavirus-like symptoms such as fever, weakness, cough and sore throat. The tanker had come from Shunan.

A fire in the midship section caused the explosion aboard the “No. 3 Heung A Pioneer” which required medical assistanceon Apr 18 while the ship was still in Tanjung Dawai, two hours away from the Port in Seberang Perai. The Fire and Rescue Department, the Seberang Jaya Hospital, the Butterworth Police Station and the Civil Defence Department (JPAM) assembled and went on standby to await the arrival of the ship which was still about 45 minutes away at 10 p.m. It arrived around midnight , and upon arrival, the medical officers boarded the unloaded tanker to check the extent of injuries and confirmed the death of one crew member. The five injured crew members were sent to the Seberang Jaya Hospital and reported to be in stable condition. The injured were identified as Kang Seongjin, 18, a South Korean; Zwe Ko Ko Hte, 28; La Min Hoo, 32; Kyaw Win (Mohd Fareez), 23 and Thai Nung (Mohd Fazreen), 25, all Myanmar citizens. Tha Tun, 35, died in the incident. The body of the deceased was also at the Seberang Jaya Hospital for post-mortem. The cause of the fire was being investigated by the authorities and there were no disruptions on the Port's operations. The ship was coming from the North Butterworth Container Terminal (NBCT) at Dermaga Dalam, Butterworth on the mainland. It had delivered its shipment to NBCT and was on its way back to Singapore when the explosion occurred.

A gas explosion occured aboard the "No. 3 Heung-a-Pioneer" on Apr 18, 2016, around 10 p.m. shortly after leaving Penang´. One crew member of Myanmar nationality died, five more were injured, and the ship requested assistance. The explosion took place in a cargo tank. The vessel turned around and anchored on Penang roads at 11 p.m. The injured crew members were taken to hospital. The tanker was bound to Singapore at the time of the accident which happened after a fire broke out amidships.