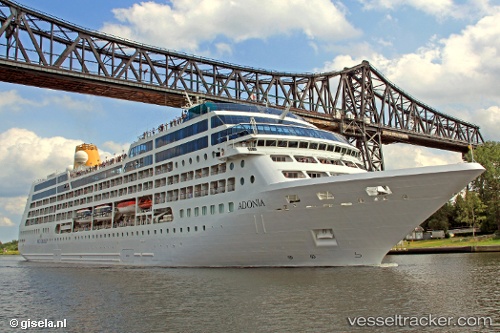 The 'Azmara Pursuit' carrying 665 passengers and a crew of 400, was banned from entering the port of Chacabuco, coming from Ushuaia ,by the authorities as a result of suspected corona virus cases. The ship was now headed to Valparaiso, ETA March 17.

Azamara Club Cruises’ new ship Azamara Pursuit has embarked on her inaugural cruise season following her official christening ceremony at the Port of Southampton, UK on 28 August. Azamara Pursuit, which formerly sailed as P&O Cruises’ Adonia was revitalised by MJM Group at Belfast’s Harland and Wolff shipyard this spring and is the third vessel to join Azamara’s boutique fleet. The ship was christened by two godmothers : Ellen Asmodeo-Giglio, executive vice president and chief revenue officer of AFAR Media, and Lucy Huxley, editor-in-chief of Travel Weekly UK.

Azamara Club Cruises has chosen two godmothers for its third ship Azamara Pursuit: Ellen Asmodeo-Giglio, executive vice president and chief revenue officer of AFAR Media, and Lucy Huxley, editor-in-chief of Travel Weekly UK. Asmodeo-Giglio and Huxley, who have almost 50 years of combined consumer and travel trade expertise, have been chosen as godmothers in recognition of both their passion for travel and their ability to represent the Azamara brand in the US and UK. “Ellen and Lucy’s fearless dedication to adventure, and respect and admiration for different cultures, aligns with Azamara’s commitment and passion to Destination Immersion experiences,” said Larry Pimentel, president and CEO of Azamara Club Cruises.