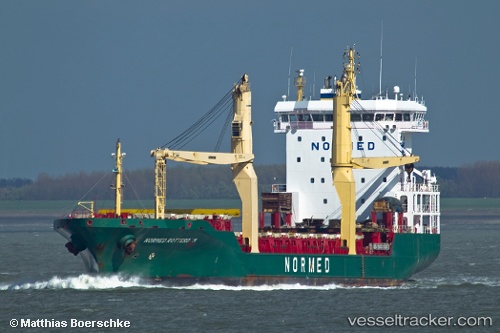 On Jan 13, 2016, at 3.26 a.m. the "BF Caloosa" reported a main engine damage in the traffic separation scheme of the Caskets, northwest of Barfleur. The unloaded ship was coming from Ceuta. As the crew was unable to repair the damage with own means, the CROSS Jobourg dispatched the emergency tug "Abeille Liberté" at 8.50 a.m. from Cherbourg to take the vessel in tow. The tug was already at sea for an exercise. At 2 p.m. the "Abeille Liberté" arrived on scene, and at 3.20 p.m. a towing Connection was established. The convoy headed to the port of Cherbourg. Weather conditions were west-northwest wind up to 25 knots and waves of 2,50 meters. On Jan 14 at 3.30 a.m. the ship was safely berthed at the Quay Normandie in Cherbourg. French report with photo: http://www.lemarin.fr/secteurs-activites/shipping/24094-l-abeille-liberte-remorque-un-navire-de-commerce

The grounding of cargo ship Bosphorus in Brisbane River, Australia, on October 29 2014 was the result of the helmsman becoming 'zoned out' and disengaged, and his failure to follow instructions, a report found. Poor crew and pilotage safety managements system, not the individual, were to blame, the Australian Transport Safety Bureau (ATSB) reported today. On the night of the grounding at Lytton Rocks Reach, the helmsman was relieved by another seafarer when the 8407gt cargo vessel was coming into port under pilotage. Soon after the changeover at the wheel, the ship began to veer starboard.ATSB highlighted the crew changeover on the bridge at "a critical point of pilotage" in a high risk area of the river."Neither the ship's safety management system nor the Brisbane Pilot's passage plan detailed any guidance or instructions relating to the handing over of the watch or helmsman during high risk areas of pilotage," ATSB found.The report was also critical that despite noting that the helmsman's mind was not on the job, no one intervened until it was too late.It said the safety message was that the bridge team, pilot, master and officer of the watch should all check the rudder angle indicator before and after each helm order. Brisbane Pilots have since upgraded their safety management system procedures.No injuries, damage, or pollution were reported at the time. Source : ihsmaritime360