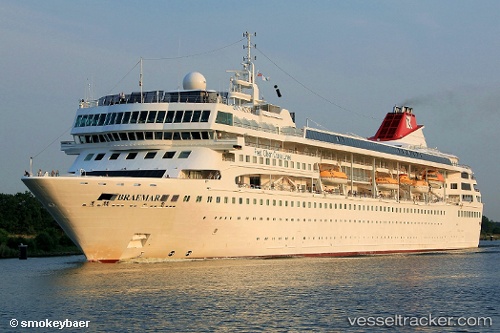 Cruise ship received in Mariel for disembarkation of passengers

In the morning of March 18 the 'Brraemar' has finally docked in Mariel, west of Havana, after a fraught search for a port that would accept it. The passengers were expected to be transferred to airplanes for transport home to the UK on the same day. Four aircraft had landed in Cuba ready for the rescue operation. The first flight was set to depart at 6 p.m. local time. After five people aboard the cruise ship tested positive for the corona virus, a further 28 passengers and 27 crew members, including a doctor, were in isolation after displaying symptoms. The number has been rising over the past few days. There are 682 passengers and 381 crew members on board. The Cuban government allowed the Braemar to dock out of "humanitarian concerns" and the need for "a shared effort to confront and stop the spread of the pandemic." Earlier this week the Braemar was allowed to anchor about 25 miles offshore in the Bahamas to be resupplied with vital food, fuel and medication. The passengers were mostly British, but also included Canadian, Australian, Belgian, Colombian, Irish, Italian, Japanese, Dutch, New Zealand, Norwegian and Swedish citizens. All guests will be flown back to the UK to land at London's Heathrow Airport. Any guest unable to fly due to illness will be offered support and medical treatment in Cuba. Three of the flights will be operated by British Airways. The third has been arranged via the UK's Foreign and Commonwealth Office and is designated for passengers who have tested positive for coronavirus or displayed any flu-like symptoms, and their companions. This flight will head to Boscombe Down, a military base west of London. Medical professionals will also be on board. French report with photo: http://www.rfi.fr/fr/am%C3%A9riques/20200319-cuba-ouvre-port-navire-croisiere-ms-baemar-passagers-coronavirus-royaume-uni

Cuba said it would allow the 'Braemar' to dock out of "humanitarian concerns" and the need for "a shared effort to confront and stop the spread of the pandemic." It was not yet clear when the ship may arrive in Cuba and where the infected passengers will be treated if the British government decides to send the ship to dock there. The cruise ship was refused docking in Barbados on March 12 and the Bahamas on March 13 and was anchored 25 miles offshore in the Bahamas where it was resupplying with vital food, fuel and medications. The vessel, which was carrying 682 passengers and 381 crew members, arrived in the Bahamas on March 14. Authorities there were the latest to prevent the ship from docking but it was given permission to drop anchor southwest of Freeport. The plan to allow the ship to sail back to the UK was ruled out on practical grounds due to the distance involved and the health of the passengers. The passengers owree predominantly British but also included Canadian, Australian, Belgian, Colombian, Irish, Italian, Japanese, Dutch, New Zealand, Norwegian and Swedish citizens.

After one passenger and four crew members have tested positive for the coronavirus, the "Braemar" dropped anchor in the morning of March 14 25 miles southwest of Freeport. It will be restocked with food, fuel and medication but not be permitted to dock. The country's transport ministry refused to allow the ship's passengers and crew to disembark at any port in the Bahamas. The Bahamian government will provide humanitarian assistance to the ship. Two British government officials were sent to Freeport to assist Bahamian authorities with the resupply operation. In addition to medical supplies and prescriptions, a doctor and nurse were scheduled to join the ship. The five people tested positive for the coronavirus on March 11 while the ship was docked in Curacao. The ship was denied permission to dock in Barbados and at other Caribbean ports. The Braemar is flagged in the Bahamas, leading the company to attempt to dock there and disembark passengers. For now, the 'Braemar' is effectively quarantined at sea.