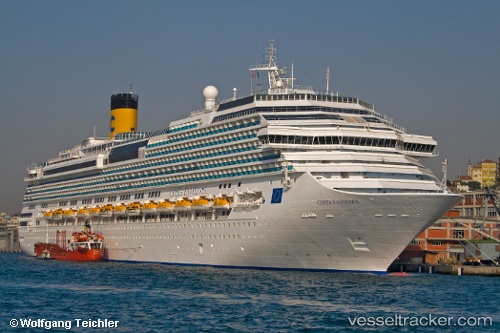 On crew member who fell ill onboard the 'Costa Favolosa' off the coast of Miami was removed from the ship on March 29 to be hospitalized. The Coast Guard escorted a cruise ship tender from to shore where the patient was to receive a higher level of medical care. People wearing hazmat suits took the patient from the Coast Guard station in Miami Beach to Palm Springs General Hospital. On March 26, more than a dozen crew members with respiratory issues from both the 'Costa Favolosa' and 'Costa Magica' were taken to three hospitals in Miami-Dade. Remaining crew members were told to isolate in guest cabins.

Seven crew members of the 'Costa Favolosa' and six of the 'Costa Magica' were medevaced with symptoms of bronchitis and pneumonia, coinciding with those of the COVID-19 on March 26 in the port of Miami for treatment. After consultation with doctors on the ship and local, state and federal health agencies, it was determined that the crew members of the two ships needed to be transported to the mainland. They were transferred to the port in small covered boats, while the cruise ships had remain at least three miles from the coast. Members of the Coast Guard and fire department, dressed in white protective suits, masks, hats and gloves, received the patients and sent them to local hospitals in units designed for infectious diseases. On each of the ships were about 1,000 people, all crew, of which about 30 were sick with flu-like symptoms. In the absence of tests, none have been examined to confirm whether they are infected with COVID-19. The ships have been sailing the Caribbean since mid-March, when passengers were landed on the islands of Martinique and Guadaloupe. Several of them have since been tested positive for the coronavirus.

Costa Favolosa to dock at Miami

The 'Costa Favolosa' planned to dock at Miami on March 26 with 30 sick people on board, showing flu like symptoms. At least six people have tested positive for COVID-19 in recent weeks after disembarking from the ship. Now, only crew members remain on board. The ship was in the middle of a scheduled sailing when the industry announced it would halt operations in response to the COVID-19 pandemic on March 13. Passengers fdisembarked in mid-March and returned to their home countries on chartered flights from Guadeloupe and Martinique.