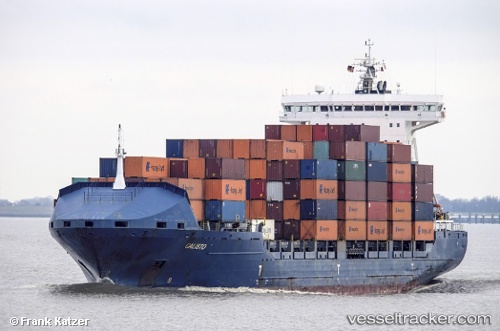 In the morning of March 24, 2019, at 9 a.m. the "Calisto", enroute from Hamburg to Gdynia, veered off course after encountering rudder trouble on the Elbe and allided with the quay of the Elbe Port n Brunsbüttel on its way towards the Kiel Canal locks.while the Liberian flagged container m/v "Calisto", 15487 gt (IMO: 9306067), which had allided with the quay of the Elbe Port Brunsbüttel on its way towards the Kiel Canal. The ship also hit the Marshall Islands flagged bulkcarrier "Interlink Affinity", 24940 gt (IMO: 9754082), in the accident. The freighter had berthed in the Elbe Port on March 21, coming from Colon, and actually remained berthed. It suffered damage too when the "Calisto" slammed against it. The police launch "Vossbrook" proceeded to the "Calisto" for investigations. She had dropped anchor in pos. 53° 53.05' N 009° 12.04' E. She resumed the voyage into the Kiel Canal at 5.30 p.m. despite the damages along its port side such as scratches and dents and berthed at the DCT Gdansk Container Terminal in Gdansk on March 26 at 4.50 a.m. Photos: https://www.forum-schiff.de/phpBB3/viewtopic.php?f=2&t=23#p157839

Unifeeder is currently experiencing a boycott of its vessel MV ‘Calisto’ in the port of Rauma, also the MV ‘Charlotta B’ is being boycotted in Kotka, the company said in its press release. The boycott is performed by the union AKT, claiming to be acting in sympathy with and upon request from ITF.