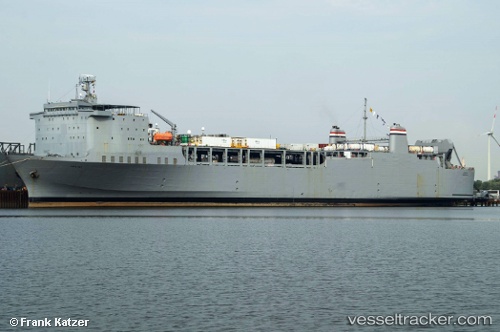 The "Cape Ray" returned home to Portsmouth on Sep 17 after a successful mission. Part of the U.S. Department of Transportation's Ready Reserve Force, the 650-foot Cape Ray was activated in December and fitted with specialized equipment for neutralizing more than 500 metric tons of sarin gas precursor and sulfur mustard. The ship left Portsmouth with a staff of 35 civilian mariners, most of them from Hampton Roads. The crew spent months waiting in port in southern Spain because Syria's government missed deadlines to hand over the chemicals. Once the material was on board, dozens of chemical engineers did the work of destroying it while the ship was at sea. International monitors and extra security personnel were also aboard. Once the chemicals were neutralized, the "Cape Ray" offloaded waste in Norway and Bremerhaven. The mission lasted so long that replacements took over for all but a handful of the crew. A few, though, were there through it all. Crew members will spend about a month dismantling and removing the equipment that was brought aboard the ship in 2013 before the "Cape Ray" can be back in her original Ready Reserve Force status. Report with photos: http://hamptonroads.com/2014/09/portsmouthbased-cape-ray-back-syria-mission

MARAD to Mark the Return of MV Cape Ray

Maritime (MARAD) Administrator Paul N. Jaenichen will host a ceremony on Friday, September 19, 2014 in Portsmouth, Va. to honor the civilian crew who helped to destroy Syria’s chemical weapons at sea aboard the MV Cape Ray. The MV Cape Ray, crewed by all-volunteer U.S. Merchant Mariners, supported an international effort with China, Denmark, Finland, Germany, Italy, Norway, Russia and the U.K. to destroy Syrian chemical weapons and agents at sea. Upon its completion, President Obama called the mission “a major milestone in the international community’s efforts under the leadership of the Organization for the Prohibition of Chemical Weapons (OPCW) to rid the Syrian regime of its chemical weapons,” adding that it “further advances [the] collective goal to ensure that the Asad regime cannot use its chemical arsenal against the Syrian people and sends a clear message that the use of these abhorrent weapons has consequences and will not be tolerated by the international community.” The M/V Cape Ray is one of MARAD’s 46 Ready Reserve Force (RRF) ships that stand ready to provide rapid movement of equipment and supplies during times of national and humanitarian emergencies.

Disposal of chemical warfare in Bremen

On Aug 4, 2014, the "Cape Ray" entered the port of Bremen to unload the remainder of the neutralised Syrian chemical weapons for final disposal in Munter, a total amount of 430 tons. The ship was escorted by the German fregate "Hamburg" which also berthed in the port. In the morning of Sep 5 the BLG Logistics Group started unloading the cargo. Reports, photos and video: http://forum-schiff.de/phpBB3/viewtopic.php?f=9&t=55#p106650 http://www.radiobremen.de/politik/nachrichten/senfgas-bremer-haefen100.html http://www.weser-kurier.de/bremen/vermischtes2_artikel,-Kriegsgas-Schiff-ist-angekommen-_arid,934753.html https://www.youtube.com/watch?v=aLW7WJCgumA&feature=youtu.be