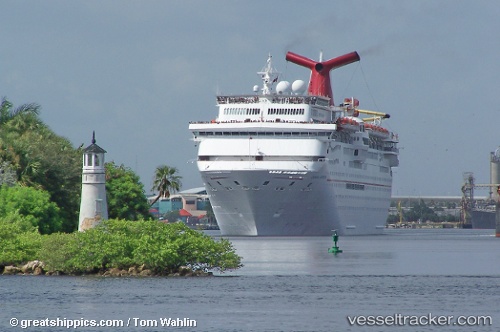 The US Coast Guard medically evacuated a 50-year-old man approximately 27 miles southwest of San Diego from the "Carnival Inspiration" on Dec 25, 2016. At approximately 7 p.m. watchstanders at Coast Guard Sector San Diego received a report from the cruise ship stating that a male passenger was experiencing heart-attack like symptoms. The Coast Guard duty flight surgeon recommended that the patient be medically evacuated and taken to a hospital for emergency care. A Coast Guard Station San Diego 45-foot Response Boat-Medium crew launched, arrived on scene, then safely embarked the man, his wife and a nurse from the cruise ship. At approximately 11 p.m., the RBM crew returned to Sector San Diego, where the patient was transferred to awaiting EMS. He was taken to UCSD Medical Center in Hillcrest.

The 2,052-passenger Carnival Inspiration will undergo a multi-million-dollar makeover that will add a wide range of new dining and bar innovations next month. The new features will be incorporated during a three-week dry dock taking place in Portland, Ore., Jan. 18 to Feb. 5, 2016. Following the renovation, the ship will resume its year-round schedule of three- and four-day Baja cruises from Long Beach, Calif.

Carnival Inspiration, due in Long Beach Monday, instead docked in San Pedro. Passengers leaving the ship were offered bus transportation back to Long Beach or to the airport. Those boarding Inspiration were told to proceed to Long Beach to be transported to San Pedro by motorcoach for check-in there. As further swells are anticipated, the vessel will spend a day at sea tomorrow, forgoing a planned call on Catalina Island. It will call on Catalina Island on Wednesday instead.