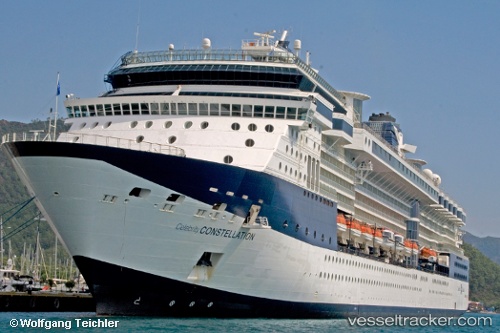 On May 9, 2022, at 1.30 p.m UTC a fire broke out in the engine room of the bunker tanker 'Punta Azzurra' at Civitavecchia during refueling of the 'Celebrity Constellation', but no damage was reported to the cruise ship. The Civitavecchia harbour master’s office, which included the assistance of two tugs, pilots, mooring crews, and the Civitavecchia Fire Brigade, responded. The flames were quickly extinguished even as the barge was disconnected from Celebrity Constellation and moved to a safe distance. During the towing operations, the CP 305 patrol boat of the Coast Guard took steps to regulate the traffic. Thermal imaging cameras and other equipment was used to verify that the fire was completely out, and the barge was taken to quay 23 for mooring and subsequent safety inspection. The 'Celebrity Constellation' was docked in Civitavecchia on May 9 during her current 13-night, one-way sailing from Barcelona to Ravenna. The ship initially departed Barcelona on May 3, and will arrive in Ravenna on May 16. Report with photos: https://baraondanews.it/civitavecchia-incendio-nave-punta-azzurra/

The Nafplio Port Authority was informed in the morning of June 4, 2021, that a 36-year-oldmember of the engine crew of the 'Celebrity Constellation' was in need of medical treatment in the sea area in the Argolic Gulf. The ship sailed to the anchorage of Nafplio, from where the man was disembarked with the assistance of a patrol boat. He was picked up by an ambulance and taken to Nafplio General Hospital.

The Nafplio Port Authority was informed in the morning of March 30, 2021, that a 36-year-old crew member of 'Celebrity Constellation', which was located near ​​the Argolic Gulf, fell ill and needed to be medevaced. The cruise ship sailed to the anchorage of Nafplio where the patient was disembarked in the presence of the officials of the Port Authority. An ambulance took him to the General Hospital of Argos for treatment.