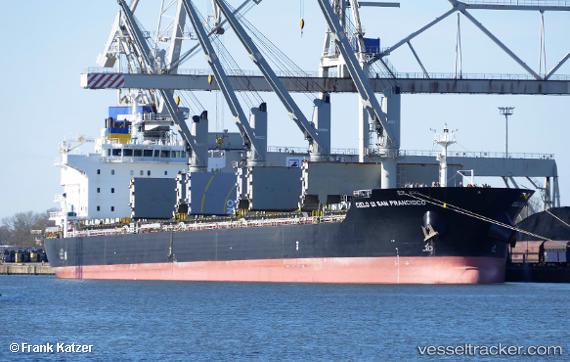 Liberia-flagged d’Amico bulk carrier Cielo di San Francisco, laden with a cargo of animal feedstock, has been freed by tug after running aground off the coast of Dublin. The 37,056 dwt, 2011-built vessel grounded close to Dun Laoghaire, South of Dublin, while enroute to Cork. Now that the procedure to refloat the vessel has taken place, which involved the emptying of the forepeak ballast tank, the vessel is to continue its voyage to anchorage where a full assessment of the hull is to take place later today. While d’Amico reports that SMIT Salvage were contracted “as a prudent measure”, there appears to be no obvious damage, no pollution and no injuries reported amongst the crew.

Preparations for refloating attempt going ahead

The "Cielo di San Francisco" was en route from Ringaskiddy, Cork, to Dublin with 21 people on board when it hit a sandbank about six miles off Bray Head, County Wicklowa, between the Kish Bank and Bray at about 9.30 a.m. on Aug 21, 2013. The Coast Guard sent an inspector by helicopter to the scene but it was not believed any damage was done to the ship which was carrying animal food. There were no reports of any injuries. A salvage attempt was to be made to refloat the ship at high tide at 11.55 p.m. The Marine Casualty Board was to Launch an investigations. Reports with photos: http://www.irishtimes.com/news/ireland/irish-news/cargo-ship-runs-aground-off-coast-of-dublin-http://www.independent.ie/irish-news/late-night-cargo-ship-rescue-off-coast-of-dublin-295http://www.independent.ie/irish-news/bid-to-free-trapped-cargo-ship-29514197.html14226.html1.1499802

Bulk carrier Cielo di San Francisco, carrying containers, ran aground on a sandbank between the Kish Bank and Bray at about 09:30 LT Aug 20 13, wrote The Irish Times. Vessel is en route from Ringaskiddy to Dublin. Tug was dispatched, if attempts to refloat vessel will fail, then the attempts will be delayed until high tide close to midnight.