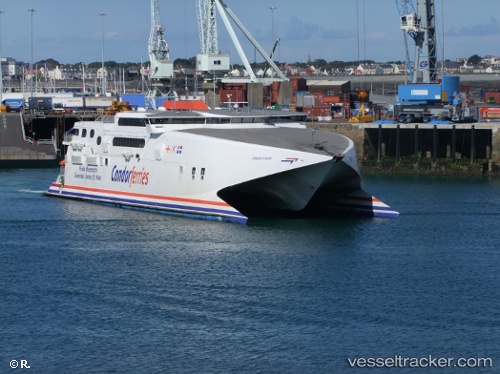 The "Condor Rapide" suffered an electrical problem at one of the engines in the evening of May 6, 2019. The 680 Jersey-bound passengers of the 6 p.m. sailing had to spend the night in Saint-Malo while the ship remained at the quay. They were accomodated by the ferry company. There was another delay for them in the morning of May 7. The ferry which was due to depart at 8 a.m., finally left the port only at 11 a.m. only, still due to the electrical problem. The delays continued all day. The 6:15 p.m. sailing departed at 8:40 p.m. from Saint-Malo. On May 8 all Condor Liberation crossings were canceled.

UK-based ship repairer and marine engineering services provider SMS has completed its first major high-speed craft refit in France this June. SMS carried out the scheduled week-long refurbishment on Condor Ferries’ Condor Rapide, docking the ferry on the Port Normands Associe’s ship lift (known as a syncrolift) at the Port of Cherbourg. The team completed minor structural repairs, electrical upgrades and work on the Wärtsilä waterjet propulsion system on the ferry’s port outer main engine. “As Condor Ferries we were impressed with both the speed and quality of SMS’s works and its coordination on the ground in Cherbourg,” said Rob Loder, ship manager for Condor Ferries. “It was a planned, challenging project and all parties performed well.” Manufactured by Rolls-Royce, the syncrolift is 90 metres long and 32 metres wide and can lift vessels weighing up to 3,000 tonnes.

The "Condor Rapide"’s return to service from dry dock has been delayed. The vessel was due to be back in action on Feb 16, 2018, but due to an engine management software issue, its return was put on hold. The fault was discovered on en route to St Malo from Falmouth in the morning. Engineers and contractors were working to rectify the problem.