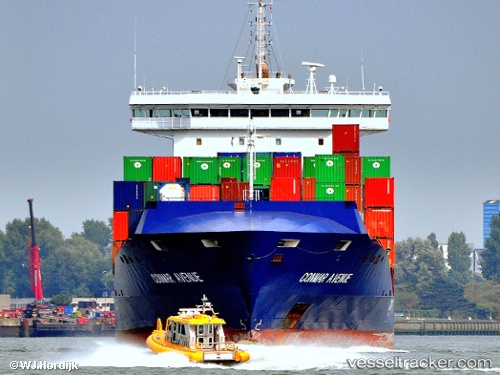 On Feb 3, 2017, at 8.45 p.m. the "Conmar Avenue", while enroute from Rauma to Hamburg, allided with the tail gate of the locks in Kiel-Holtenau upon entering the Kiel Canal. Shortly thereafter the ship entered the southern lock chamber with low speed. The reduced visibility contributed to the accident. The lock was closed, and the water police attended the ship for investigations. The pilot boat "Holtenau" to carry out visual inspections. At 9.40 p.m. the "Conmar Avenue" could continue the voyage and berthed at the Dradenau Port in Hamburg on Feb 4 at 7 a.m. German report with photo: http://forum-schiff.de/phpBB3/viewtopic.php?f=2&t=23#p133726

On Aug 11, 2016, at 01:30 a.m. the "Conmar Avenue" suffered rudder failure enroute from Hamburg to Kronshtadt during the Eastbound transit of the Kiel Canal close to the Levensau road bridge. At 1.45 a.m. two tugs were ordered to asisst, first on scene was the SFK-tug "Stein" which reached the vessel around 2.30 a.m. and connected to the stern of the vessel. With 0,5 - 1 knot speed it started towing the ship towards the canal locks in Holtenau where the tug "Holtenau" joined the convoy at 2.55 a.m. At 4.20 a.m. it entered the northern lock. The "Conmar Avenue" was moored in the Scheer Port of Kiel at 4.45 a.m. for repairs. Ship traffic in the canal was hardly affected during that time. German reports with photos: http://forum-schiff.de/phpBB3/viewtopic.php?f=2&t=23&p=128572#p128572 http://www.kn-online.de/News/Nachrichten-vom-NOK/Schifffahrt-Kiel-Frachter-nach-Havarie-eingeschleppt

On Feb 16, 2014, the 56-year-old master of the Dutch barge "Fryslân", from Leeuwarden, was killed win the midday hours in the port of Rotterdam, after a piece of steel fell off a container and crashed into the wheelhouse of the barge. His 60 -year-old wife and a 45-year old employee of the port terminal, have been injured. The accident happened during loading a ship-ship transfer with the cargo m/v "Conmar Avenue" alongside which the barge was moored. The injured woman and the worker from Ridderkerk were taken to hospital immediately. According to the police, their injuries were not life-threatening. The "Conmar Avenue" shifted from the Maasvlakte to Waalhaven North on Feb 17 at 6.40 a.m. having Helsinki as next destination with an ETA of Feb 20. Dutch report with photo and video: http://www.rijnmond.nl/nieuws/16-02-2014/dode-door-val-lading-bij-containerterminal