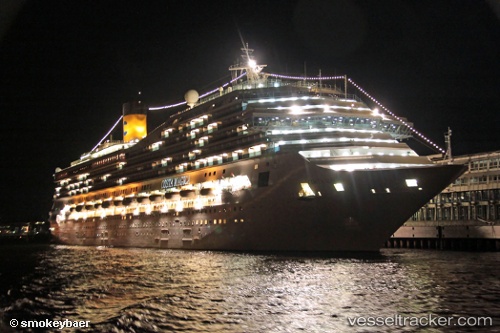 Cruise ship in Genoa after disembarkation of passengers

On March 27 the 'MSC Splendida' with about 1100 crew members on board and the 'Costa Pacifica' with 900 crew members arrived in Genoa. None of the crew was showing coronavirus symptoms, some of whom awaited repatriation through special flights or transfers organized by Costa Cruises in coordination with national and international authorities. The Costa ship had completed the disembarkation of passengers at the port of Civitavecchia. The regional civil protection has however been activated to implement all the security measures already adopted in Savona for the 'Costa Luminosa'. Both companies have developed plans to repatriate as many seafarers as possible in their homes. As for the 'MSC Splendida', the ship landed the last passengers left on board in Marseille and then left for Genoa.

Seven crew members of the 'Costa Favolosa' and six of the 'Costa Magica' were medevaced with symptoms of bronchitis and pneumonia, coinciding with those of the COVID-19 on March 26 in the port of Miami for treatment. After consultation with doctors on the ship and local, state and federal health agencies, it was determined that the crew members of the two ships needed to be transported to the mainland. They were transferred to the port in small covered boats, while the cruise ships had remain at least three miles from the coast. Members of the Coast Guard and fire department, dressed in white protective suits, masks, hats and gloves, received the patients and sent them to local hospitals in units designed for infectious diseases. On each of the ships were about 1,000 people, all crew, of which about 30 were sick with flu-like symptoms. In the absence of tests, none have been examined to confirm whether they are infected with COVID-19. The ships have been sailing the Caribbean since mid-March, when passengers were landed on the islands of Martinique and Guadaloupe. Several of them have since been tested positive for the coronavirus.

The Cuban authorities refused to allow the 'Costa Magica' to dock on March 25. The ship has 900 crew members on board, including 130 Italians. There were nearly a hundred people infected with coronavirus. After spending several days off Martinique, the 'Costa Magica' was now heading for Miami. Berthing may be allowed, but it will depend on the situation on board the ship. Costa Cruise stressed that the priority is to bring all the crew members home and the company has been working with Italian and international authorities for several days to find a solution as soon as possible. In the meantime, the medical situation on board was monitored by the medical staff. The ship received additional medical equipment. As for the crew members, they were all in isolation in the cabins with balconies. They receive free internet to stay in touch with their families and loved ones.