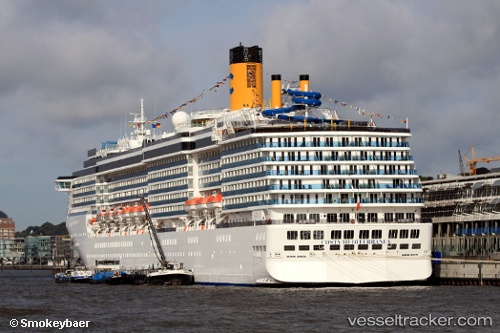 The 'Costa Mediterranea' was continuing its tour of Italian ports in order to embark crew members to return to Southeast Asia. Back from the Indian Ocean, the vessel had made a first stopover in Naples from April 7 to 9, then on April 10 entered the port of La Spezia in order to disembark some personnel and embark crew members, including Filipinos and Indonesians, from other vessels, such as the 'Costa Pacifica'. Departing on April 13, the ship arrived in Brindisi on the April 16, where the 'Costa Fortuna' had already been moored, in order to transfer personnel there too. The ship was originally scheduled to arrive in the Asian region at the end of November with a view to its transfer to the new Chinese company CSSC Carnival Cruise Shipping, which already received its sistership, the 'Costa Atlantica', at the beginning of the year. The repatriation of cruise ship staff was currently being very complicated due to border closings and drastic reduction in air connections. The 'Costa Mediterranea' will therefore take advantage of its transit to Asia to bring home many crew members from this area.