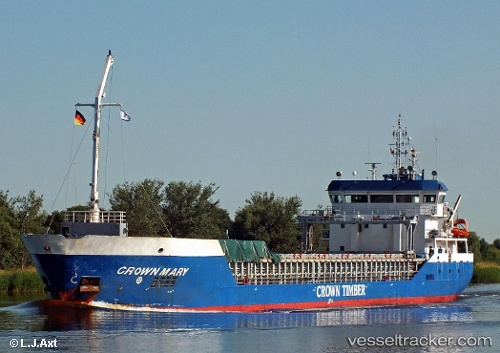 Detention of Dutch Flagged Cargoship In Wicklow Port Is Lifted

The detention of a Dutch flagged general cargoship in Wicklow Port since the weekend has finally been lifted as the vessel is no longer currently listed by the Paris MoU, writes Jehan Ashmore. Crown Mary had arrived to Wicklow last week to where packaged timber was discharged, however the 2,622 gross tonnage vessel was detained by the Paris MoU. Ireland is a member of The Paris MoU (Memorandum of Understanding) on Port State Control (PSC) that came into effect in 1982. This has enabled the international organisation to eliminate the operation of sub-standard ships through a harmonized system of PSC. The detention of the Crown Mary that only dates to 2010, involved the Irish PSC authorities to carry out an inspection of the vessel. This led to the 88m vessel shift berths to the port’s non-commercial East Pier so to free up the berth at the Packet Pier for another Dutch flagged cargoship, Thea Marieke. This similar sized vessel on Monday then called to Dublin Port to where that same day the then detained Crown Mary was originally next bound. http://afloat.ie/port-news/port-and-shipping-news/item/35942-dutch-flagged-cargoship-released-from-detention-in-wicklow-port

On Jan 10, 2016, a crew member of the "Crown Mary" was medevaced by the lifeboat "Harro Koebke" of the DGzRS Station Sassnitz north of Rügen. The lifeboat was dispatched by the MRCC Bremen aroudn p.m after the 40 year old Russian had suffered health problems which required medical assistance. Due to the rough seas and SE winds of 7 Beaufort the lifeboat requested the ship to proceed to a more sheltered position north of the island. The Patient was immediately treated aboard the lifeboat and delivered to an ambulance in Sassnitz at 9 p.m. for further treatment in hospital.

Investigation of near miss finalized

On July 25, 2013, the preliminary investigation regarding the near miss of the "Crown Mary" on June 29 has been completed. West Finland Coast Guard suspected the master to have been intoxicated with a blood alcohol level of 1,89 per thousand and thereby having endangered the traffic safety. One of the ship's officers, who at the time of the incident was off duty, had responded to the Coastguard's helicopter spotlight. The first officer rushed up to the wheelhouse and could avoid a serious accident.