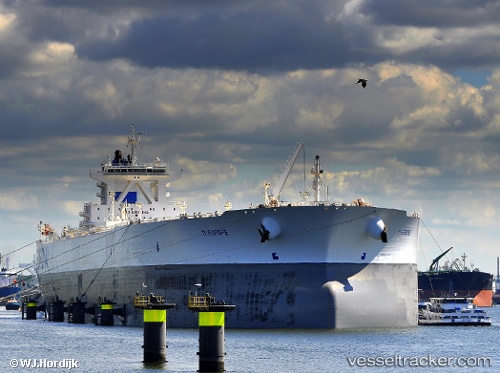 One of the world’s largest crude tankers by tonnage has been reported booked on period charter, according to brokers’ reports. Euronav’s ULCC TI Europe (pictured; 441,600 dwt, built 2002) has been reported fixed to an unnamed charterer for one year at an unreported daily rate. Oil markets being what they are, there isn’t much call for super-sized tankers anymore, leading traders to opt to book ULCCs such as TI Europe and its sistership Overseas Laura Lynn (441,600 dwt, built 2003) as floating storage. Unipec reportedly booked TI Europe in August 2014 for use as floating storage off Singapore. The contract terminated earlier this month. Reuters claims Unipec had been paying $40,000 a day to charter the ship, and new bids for it have come in at around $36,000 a day. http://splash247.com/worlds-largest-oil-tanker-booked-period-charter/

(Reuters) – The UK-based trading arm of Beijing-backed Sinopec will give up the megatanker it booked to park crude in Asia at the onset of the drop in global prices two years ago, sources told Reuters. Unipec UK took over a lease on the TI Europe, one of just two Ultra Large Crude Carriers capable of holding more than 3 million barrels of oil, in the Straight of Malacca in late 2014, just as oil prices began to slide below $100 per barrel and the excess of crude was filling the world’s on shore tanks. https://gcaptain.com/supertanker-ti-europe-back-on-market-as-chinas-unipec-gives-up-floating-storage-lease/?utm_source=feedburner&utm_medium=feed&utm_campaign=Feed%3A+Gcaptain+%28gCaptain.com%29

Chinese oil major Unipec has provisionally hired an ultra large crude carrier possibly to store crude around Singapore, market participants said.The 442,000-dwt and 2002 built, TI Europe, has been taken on a six-month time charter by Unipec at a daily rate of $25,600, brokers, shipowners and charterers said. There is an option to extend the time charter period by another six months at $28,600/day, they said.The TI Europe was earlier used for floating storage of fuel oil by Litasco and St Shipping, which is trading house Glencore’s shipping arm, according to the sources.“There is a contango in the [Brent] market, so putting two plus two together, it has to be for crude storage,” said a source with a VLCC owner.