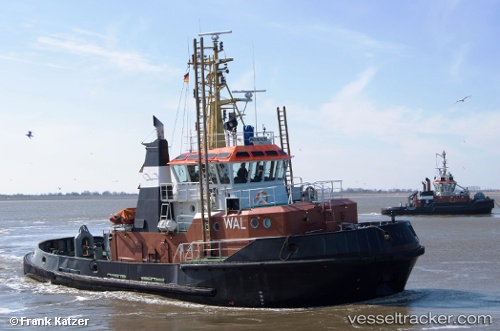 Seeponton 1 at its destination after collision

After its collision with the Gibraltar-flagged tank m/v "Kösterberg" (IMO: 9184677), which is actually docked at the Norder Yard Hamburg for repair of its bow damage, the barge "Seeponton 1", 2473 gt (IMO: 9364497), being pulled by the "Wal", which also had suffered hull damage in the accident and was berthed at the Ems Quay in Emden since, finally left the port on Jan 28 at 9.50 a.m. bound for Papenburg. The tow reached its destination at 2 p.m. being assisted on the transit by the tug "Finn" of ESB. Dutch photo report: http://www.tugspotters.com/site/content/2013/01/vandaag-gezien-te-papenburg/

In the morning Jan 25, 2013, the Gibraltar-flagged tank m/v "Kösterberg" (IMO: 9184677), being loaded with 2500 tons heavy fuel, was in collision with the barge "Seeponton 1", 2473 gt (IMO: 9364497), which was being pulled by the "Wal" on the Ems, in dense fog. The "Kösterberg" was enroute Hamburg-Emden to unload ist cargo. Near Eemshaven the ship tried to pass the "Wal" which was enroute from Bremerhaven to Papenburg. The hull of the tanker was dented on port side on a length of five metres. Also the starboard sidee of the "Emspnton 1" was damaged. Both vessels were damaged above the water line. The police launched an Investigation against the Polish master of the "Kösterberg" which was assisted by a pilot. He had to pay a safety fine of 7000 Euro. After the tanker docked in Emden at 8.45 a.m., it was detained. The Wal" berthed at the Ems Quay in Emden around 9 a.m. Photo report: http://forum-schiff.de/phpBB3/viewtopic.php?f=2&t=23#p84821

On Feb 11, 2012, the starboard anchor of the "Wal" got entangled with another anchor off Falmouth while bringing two crew members on board the jack up "Odin". The tug's captain asked the "Odin" to lift the "third acnhor" with its 300 t Liebherr crane. The anchor must have been lost some decades ago, as there was only little iron left to it. It was landed at Milford Haven on Feb 17.