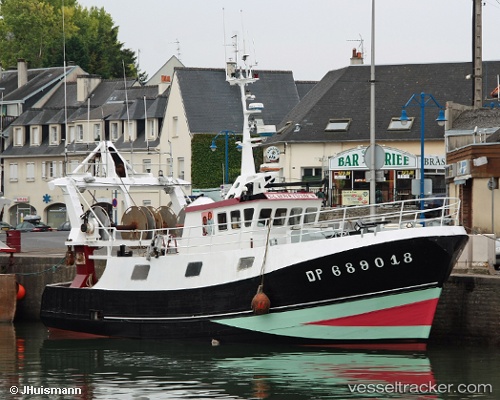 Fire on trawler brought under control

On Nov 27, 2019 at 1:44 p.m. the CROSS Jobourg was alerted by several shellfish vessels that a fire broke out in the engine room of the trawler 'Schneivins' which was 8,5 nautical miles northwest of Ouistreham with a crew of five on board. The CROSS immediately broadcasted a Mayday Relay message amd dispatched the offshore patrol vessel 'Thémis' from Cherbourg, a Dragon helicopter of the Civil Security based in Le Havre, the SNSM lifeboat 'Saint-Anne-des-Flots' from the staion in Ouistreham; and the fire department in Caen. The nearby fishing vessel 'Le Granvillais' responded to the Mayday Relay and took the casualty in tow to the port of Ouistreham at 2 p.m. The crew aboard was safe on the deck and continued to try to control the fire. At 2:13 p.m., however, the fire resumed. At 2.26 p.m. also the 'Thémis' arrived but was unable to assist the trawler given the difficult weather conditions and the refusal of assistance by the crew of the 'Schneivins' who did not wish to risk a man's life in a boarding operation given the state of the sea with a swell of four meters and winds of 30 knots gusting up to 40-50 knots. The CROSS then decided to drop off three fire fighters from Le Havre using the Dragon helicopter. At 3.56 p.m. they were winched onto the deck with their equipment on board the trawler. At 4:31 p.m., the fire seemed to be spreading. The crew of the SNSM boat, the trawler crew and the firefighters continued their response with fire hoses and at 5:07 p.m. they managed to put the fire out. At 5.45 p.m., the fishing vessel was docked at Ouistreham and taken over by forces of the SDIS 14 to continue the investigations. All those involved in the operation were safe and sound. French report with photos: https://france3-regions.francetvinfo.fr/normandie/calvados/ouistreham/cinq-marins-font-face-incendie-bord-navire-peche-1755611.html https://www.ouest-france.fr/normandie/ouistreham-14150/ouistreham-le-chalutier-incendie-mercredi-est-remorque-jusque-dans-le-port-de-caen-6629393

On Jan 4, 2017, at 7.50 p.m. a crew member was medevaced from the "Schneivin's" off Port-en-Bessin. The CROSS Manche was informed that the fisherman required medical attention. The vessel was two miles north of Port-en-Bessin. The CROSS Jobourg organized a medical teleconference with the maritime medical coordination SAMU in Le Havre and the ship. A Cayman helicopter of the Navy base in Maupertus airlifted the patient and transferred him to the Carpiquet airport where an ambulance was ready to take him to hospital in Caen.

On Mar 1, 2014, at 6 p.m. the "Schneivin" informed the CROSS Gris Nez that a crew member was injured in a a fall about 21 nautical miles off Dieppe. Immediately, the CROSS Gris Nez held a conference call with the Centre for Maritime Medical Consultation in Toulouse, the ship and the SAMU medical coordination in Le Havre. A medical evacuation helicopter was recommended. The CROSS Gris Nez dispatchte a Dauphin helicopter of the Navy Base in Le Touquet with a medical team of the hospital in Boulogne on board. After it arrived in the area at 5.10 p.m., the medical team was winched aboard the trawler before the 42 year old fisherman was hoisted and taken to the hospital in Dieppe. French report with photo: http://www.premar-manche.gouv.fr/actualites-communiques-presse/vacuation-medicale-marin-pecheur.html