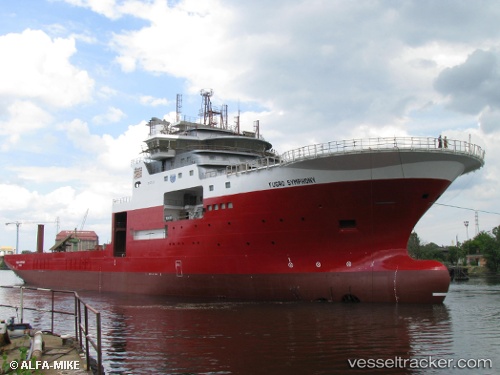 Fire on offshore ship in Peterhead

In the morning of Sep 17, 2015, at 2.52 a.m. the Aberdeen Operations Control was alerted that a fire had broken out aboard the "Fugro Symphony" in the port of Peterhead. The 84 people aboard were evacuated, and 35 firefighters fought to bring the fire under control for nearly two hours. The crew was taken to Peterhead Fishermen’s mission but re-boarded the vessel after the Scottish Fire and Rescue Service put out the fire. Appliances from Peterhead, Maud and Ellon fire stations were mobilized, and three firefighters wearing breathing apparatus along with a member of the ship’s firefighting team located the fire in supply generator room below deck. They extinguished the fire using CO2 extinguishers and the ships internal firefighting mechanisms. The fire crews left the scene at 5 a.m. It was contained in a small area of the vessel. All personnel returned to the vessel once it was confirmed safe to do so. A Fugro team went onboard to investigate the cause of the incident.

Geotechnical, survey, subsea and geosciences services firm Fugro informs it has secured a contract for the installation and burial of array cables at the Rampion Offshore Wind Farm being built in the English Channel, 13 kilometers off the Sussex coast, by E.ON alongside partners, the UK Green Investment Bank plc. The contract will see Fugro lay and bury the cables with its construction and installation vessels Fugro Symphony and Fugro Saltire using one of its two Q1400 trenching systems to bury the cables. The array cables will be pulled in and laid between the wind turbines and the offshore substation, where the power is then transmitted onshore. Engineering and planning will commence immediately, with installation being carried out in two phases in 2016 and 2017. http://www.marinelink.com/news/install-rampion-cables397671.aspx

All 84 crew members have been evacuated from the "Fugro Symphony" after a fire started in an electrical switch room in the lower decks on May 20, 2015. They were taken to the Fishermen's Mission in Peterhead. Fire crews were alerted at 3 a.m. and had the blaze under control within two hours. At the height of the incident 35 firefighters of the Scottish Fire and Rescue Service (SFRS) were involved in tackling the fire. The SFRS had five appliances, a foam unit and an incident support unit at the scene. Three firefighters wearing breathing apparatus and a member of the ship's firefighting team traced the fire to the supply generator room. They battled the blaze using CO2 extinguishers and the ship's internal firefighting mechanisms.