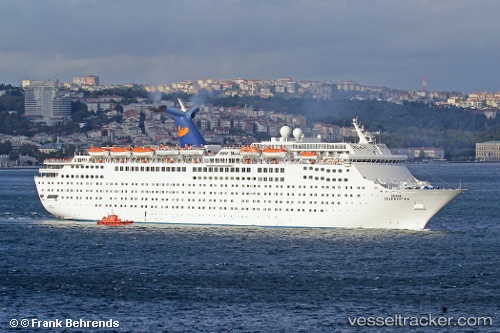 Two more cruises have been cancelled due to hurricane Dorian, as the storm slowly moved toward Florida. The sailing from Palm Beach to Freeport on Sep 5 by the "Grand Celebration" has been cancelled, making it three cancelled voyages for the company due to the hurricane. The "Mariner of the Seas" Sept. 2 sailing from Port Canaveral has been cancelled, after initially being delayed by two days. The ship was set to return to port from her Aug 30 sailing on Wednesday, and is now expected back to port on Sept. 5.

The Grand Celebration, one of two vessels in Bahamas Paradise Cruise Lines' fleet, has canceled two months' of sailings in order to deploy to Massachussetts for an emergency relief effort. She has been chartered by utility firm Columbia Gas to provide housing for the hundreds of repair workers who are helping to restore service in the wake of the Merrimack Valley gas explosions, which killed one and injured dozens in several towns north of Boston.

Cruise ship broke from its moorings

On Jan 3, 2018, at 2 p.m. as a Northeast "bomb cyclone" passed west of the Bahamas, the "Grand Celebration" broke from her moorings at the port of Freeport by high winds and was pushed up against a wharf. The starboard side stern caused some damage to the quay. She has since been moved back to a safe berth by harbour tugs at 3 p.m. Passengers were beginning to return to the vessel at the time of the incident, and reboarding was delayed while tugs brought the ship back to the pier. The strong winds also brought down the huge canopy tent at the terminal to protect passengers from the rain. Passengers waited in long lines outside the terminal waiting to board the ship. The ship’s hull may have sustained slight damage during the incident. On Jan 4, the "Grand Celebration" was already again under way off West Palm Beach, bound for the Bahamas. Reports with photos and video: https://www.maritime-executive.com/article/cruise-ship-strikes-pier-in-freeport http://www.tribune242.com/news/2018/jan/04/grand-celebration-port-drama/