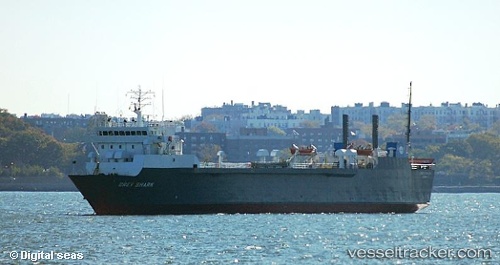 Firefighters on Staten Island are working to extinguish a fire that has been smoldering aboard a ship for about three days, a Coast Guard spokeswoman said The 360-foot vessel --the Motor Vessel Grey Shark -- is currently docked at the Homeport Pier in Stapleton. FDNY and NYPD members, as well as the Coast Guard and the ship's owners are working together to put out the fire, the spokeswoman said. The Panamanian-flagged roll-on/roll-off vessel departed New York on March 11, bound for the Caribbean Sea with 13 crew members aboard, the spokeswoman said. Problems began for the ship on Saturday when one of the vessel's two engines stopped working, the spokeswoman said. The fire broke out the next day, at around 4 p.m., in the ship's cargo spaces after the vessel experienced difficulty with its second engine while traveling back to New York for repairs. Officials said the fire was contained by the on-board firefighting system but continued to smolder since the initial ignition. No injuries were reported, the spokeswoman said. http://www.silive.com/news/index.ssf/2015/03/fdny_battles_fire_aboard_ship.html

On Jan 29, 2013, at 9:45 p.m. the New York police received a call from the "Grey Shark" which was anchored in the New York Harbor between the Verrazano Bridge and the Staten Island Ferry Terminal, after the Egyptian master had suffered a heart attack. NYPD Harbor, with a tactical medic of the Emergency Services Unit on board, was deployed to the "Grey Shark", where the medic boarded to treat the man. After stabilizing him, it was decided that the the patient was to be airlifted and taken to a hospital. NYPD Aviation 14, a Bell 412 Air, Sea Rescue helicopter already en route to the location, upon arrival lowered a Stokes rescue basket to the deck. The patient was secured in the basket and hoisted into the helicopter. The officers on board deployed a hook to the ship below to retrieve the medical so that he could continue to monitor the patient on board the helicopter while en route to the hospital. He was then transported to Staten Island University North Hospital where he is listed in stable condition. Report with video: http://www.theyeshivaworld.com/news/Video+Section/154939/VIDEO%3A-NYPD-Rescues-Ship-Captain-by-Helicopter.html