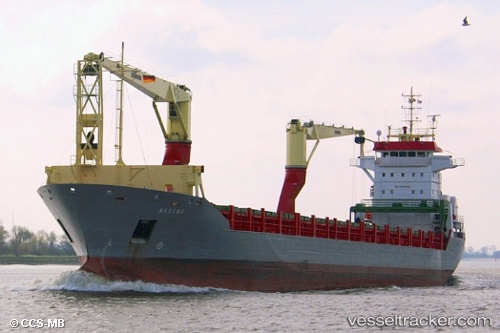 The 'Amelakia' which had suffered an engine failure at Port Said anchorage on Dec 9, 2020, is under repair at Ampelakia since Dec 20 with regards to the class surveyor's recommendations. Upon the completion of repairs, the vessel will carry out sea trials under the supervision of the surveyor panel. A new set of spare parts was provided by the owners from the manufacturer. The vessel remains stationary at Ampelakia as of Feb 19, 2021.

Sold to German buyers for $6.5 mill

Ukrainian crew of a Dutch m/v Maxima stranded in Shanghai

11 crew of a Dutch general cargo vessel Maxima sent a letter to Maritime Bulletin, asking to help them. Vessel is stuck in Shanghai, anchored since Nov 15 12 after the collision with Chinese m/v JINGFAN 1 (MMSI:413371680), which resulted in oil leakage. All the involved parties are engaged in a dispute since then, with vessel and all-Ukrainian crew being held as hostages. Wage delay is 5 months, total debt is $156,000. Crew pleaded to Netherlands Consular, to ITF and to Managing Directors Frens Sikkema and Frieda de Graaf of Transship Management B.V., but to no avail. Not that they’re abandoned, all corresponding parties replied, asking the crew to be patient. Still, there are no money and no information as to what is going on, when and how the story is to be finished. The Dutch owners are apparently in a difficult situation, especially so if their vessel isn’t the main culprit to be blamed for a spill. They’re suffering heavy losses, there is no doubt about that. Still, it’s not an excuse for 5 months wages delay. It may be assumed that the Dutch owners simply leave it as it is just because the crew is Ukrainian, and as such, poses no risk of a public scandal, who’s to stand up for them? ITF London, and Shanghai bureau or whatever there is, inspector maybe, is in no sweats to assist the crew. It is understood, that the Dutch company has an agreement with ITF, meaning company is paying obligatory levy to trade unionists, so there is no reason why ITF should bother itself with the crew, if there’s no profit in the end. After all, that’s what ITF is all about – to rule and to get profit, isn’t it? I’ll try to attract as much public attention in Ukraine to the story as possible, hoping Ukrainian Ministry of Foreign Affairs will wake up and maybe do something, to help its’ citizen. Maritime Bulletin Voytenko Mikhail Mar 28 13