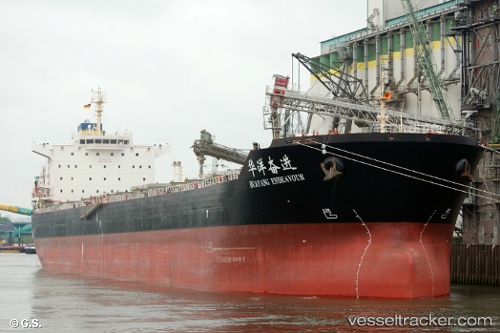 The UK Government’s Marine Accident Investigation Branch (MAIB) has released its findings on the collision of the "Huayang Endeavour" and the "Seafrontier" that took place in the Dover Strait in the English Channel on July 1, 2017, approximately five nautical miles to the west of Sandettie Bank. Both vessels sustained damage in the collision but were able to proceed to nearby ports for damage assessment. The accident did not result in any injuries or pollution. The MAIB investigation identified that a very high frequency (VHF) radio conversation between the two vessels had resulted in the two bridge teams holding conflicting views as to how the "Huayang Endeavour" should overtake the "Seafrontier". Subsequently, the "Seafrontier"’s bridge team did not check for sea room astern before altering course, leading to a close quarter situation between the two vessels. The MAIB reported that the "Seafrontier"’s master had been present on the bridge for over 14 hours and was probably suffering from fatigue, which was likely to have affected his decision. The accident investigation teams also found that Huayang Endeavour’s bridge team did not complete effective long-range scanning as required by the Convention on the International Regulations for Preventing Collisions at Sea, 1972 (COLREG’s). The MAIB viewed the use of VHF to resolve the situation as inappropriate due to the time it took for effective action to be taken, the quality of the verbal communication and the lack of a shared plan. It added that the "Seafrontier"’s bridge team did not monitor the "Huayang Endeavour"’s manoeuvres after the VHF conversation, and as they did not check for sea room before altering course, were unaware of the bulk carrier’s position. In its recommendations, the MAIB said: “Following its internal investigation Huayang Endeavour’s manager has amended its procedures for the use of VHF for collision avoidance, and promulgated the lessons learned from this accident to its fleet. The manager of Seafrontier, has also completed an internal investigation, and has taken a number of steps to train its personnel in bridge and crew resource management, review its procedures, and promulgated the lessons from this accident to its fleet."

The "Seafronier" with 37,953 tonnes of petrol on board was in collision with the unloaded "Huayang Endeavour" in the Strait of Dover in the south west channel of the main shipping lane 15 miles East of Dover in pos. 1 14N 001 45E on July 1, 2017, at 2 a.m. The tanker had a crew of 27 on board. The "Huayang Endeavour" had 22 people on board. None of the 49 crew members from India and China were injured and all hands were accounted for. Lifeboats from Dover and Ramsgate were called out at 2.42 a.m. and 2.37 a.m., respectively. along with 15 volunteers to assist in the rescue operation. Nine crew were on board the "City of London 2" from Dover and six on board the "Esme Anderson" from Ramsgate. The Ramsgate lifeboat was launched at 02.37 a.m. and on scene at 03.15 0.am. The Dover lifeboat was launched at 02.42am and was on the scene at 03.59 a.m. Weather conditions at the time of the call-out showed a moderate wind and the state of the sea was calm. The Ramsgate lifeboat was tasked with standing alongside the "Seafrontier" while the Dover lifeboat stood ready to assist the "Huayang Endeavour". Both ships had dropped anchor at the accident site. The Maritime Operations Center (COM) of the Maritime Prefecture of the Channel and the North Sea in Cherbourg in conjunction with the CROSS Gris-Nez participated in the operational evaluations on the area and stood ready to intervene if necessary. The COM also mobilized an Evaluation and Response Team (IEE) consisting of a vessel safety inspector from the Inter-Regional Directorate for the Sea (DIRM), a pilot from the Port of Dunkerque and an officer of the tug "Abeille Languedoc". Around 8:00 a.m, this team was dropped off on the "Seafrontier" from an SP Dauphin helicopter of the French Navy base in Le Touquet and started conducting investigations to determine the continuation of operations. The COM Cherbourg put on alert, as a preventive measure, the support vessel "Argonaute", stationed in Brest (29), with a team from the Center of Practical Expertise (CEPPOL) of the French Navy. No pollution was observed at this stage. The UK Coastguard on its side carried out checks at the scene and no water was taken on board by either vessels nor was any pollution or fuel ditched into the water. Counter pollution and salvage surveyors from the Maritime and Coastguard Agency were monitoring the situation. The British Coastguard deployed the helicopter 163 which meanwhile was stood down as well as the lifeboats which returned after the arrival of the tug "Abeille Languedoc" from Boulogne-sur-Mer at 5.44 a.m. and which took the tanker in tow to Antwerp. The "Huyang Endeavour" was headed for Lagos, the "Seafrontier" was bound for Puerto Barrios. The "Seafrontier" suffered a hole above the waterline and damage to the port side superstructure. The "Huayang Endavour" berthed at the Quay de Douvres in Dunkirk at 9.30 p.m. She left the port of Dunkirk after completition of repairs on July 21 at 10.30 p.m. and headed to Ust-Luga, ETA July 26. Reports with photos: http://www.dailymail.co.uk/news/article-4657122/Tanker-collides-cargo-ship-English-Channel.html#ixzz4lfUYWkui http://www.bbc.com/news/uk-england-kent-40467221 http://www.kentonline.co.uk/dover/news/oil-tanker-in-crash-with-128159/ http://www.kentlive.news/a-tank-carrying-38-000-of-petrol-collided-with-a-bulk-carrier-in-the-dover-straight/story-30418893-detail/story.html#6akVWLlgvGKoQpTJ.99 https://rnli.org/news-and-media/2017/july/01/dover-and-ramsgate-lifeboats-launched-after-a-major-collision-in-the-english-ch https://www.premar-manche.gouv.fr/communiques-presse/communique-presse-fin-operation-assistance-suite-une-collision-entre-deux-cargos-dans-detroit-pas-calais.html https://www.premar-manche.gouv.fr/communiques-presse/communique-presse-collision-entre-deux-cargos-dans-detroit-pas-calais.html