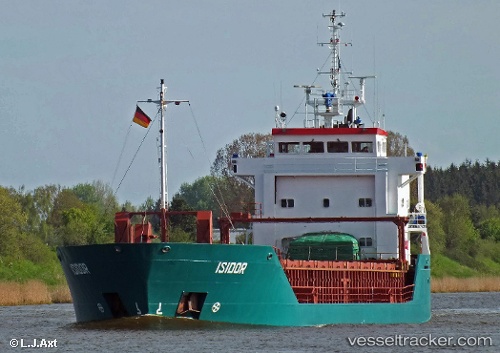 On Dec 22, 2019, lots of wooden planks were washed ashore in Sørlandet which were lost from the 'Isidor' on Dec 8/9 in stormy seas in the Northsea. On the whole 1,200 tonnes of planks went over board and partially ended up in Grimstad and Arendal. A number of individuals, the rescue boat 'Inge Steensland' and fishermen have worked to salvage large parts of the planks. An ice-ripped patch was found on one of the plank bundles with which it was found out that "Södra Hamina" in Finland was behind the load and confirmed that they had used the 'Isidor' for the shipment. The Port of Arendal contacted the Danish shipping company Echoship which confirmed the incident. The cargo ship had left Hamina on Nov 28 bound to Humber where the ship arrived on Dec 11. It was not texactly where the ship lost its cargo, but it was probably in the middle of the North Sea. The ship had nearly 1,700 cubic meters of timber on deck with an equivalent between 1200 and 1300 tonnes. The Norwegian Maritime Directorate had not received any messages from ships that had lost cargo. The shipping company only had notified international maritime authorities and its own insurance company which complied with international rules. The Coastal Administration Southeast had no record of the amount of planks that were still in the sea along the southern coast. Reports with photos: https://www.nrk.no/sorlandet/lasteskipet-som-mistet-1200-tonn-planker-er-funnet-1.14841043?fbclid=IwAR1VwTDfvjv09hVdCDw5YuKMC_kaevUy7rbenyiksrb6u3WkjKqbOowI51o https://www.maritime-executive.com/article/two-norwegian-port-towns-get-floating-lumber-for-christmas

Cargo ship under repair in Kiel after pump malfunction

Enroute from Bremen, where she had sailed on June 26, 2014, to Liepaja the "Isidor" suffered a malfunction of a pump and water ingress in the follow up during the transit of the Kiel Canal. The Lindenau Yard in Kiel was contracted with the repair work, but as no quay space was availabe, the ship berthed at the North Jetty in the Scheer Port of Kiel on July 27, where the repairs were being carried out since. Photos: http://forum-schiff.de/phpBB3/viewtopic.php?f=9&t=1377#p105047 http://forum-schiff.de/phpBB3/viewtopic.php?f=9&t=1377#p104998