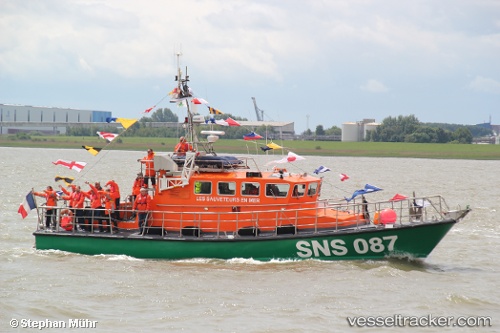 On Jan 28, 2021, the CROSS Gris-Nez was informed that several migrant boats were in difficulties in the Strait of Pas-de-Calais. The SAMU 59 relayed a call from a boat of migrants in difficulty off Dunkirk. The CROSS then deployed the 'Scarpe' as well as the lifeboat 'Notre-Dame des Flandres' of the SNSM station Gravelines which recovered the nine castaways. They wree taken care of by the firefighters of the departmental fire and rescue service upon their arrival at the dock at the port of Dunkirk, as well as the border police. The CROSS Gris-Nez also received a call from distressed migrants in difficulty 2.4 nautical miles north of Dunkirk. The dredger 'Mahury' reported to the CROSS that it had a visual contact to the boat. The CROSS deployed the lifeboat 'Jean Bart II' of the SNSM station Dunkirk which then recovered the 10 castaways. The boat dropped them off at the port of Dunkirk where they were taken care of by the PAF. The CROSS Gris-Nez was then informed by the ferry 'Dover Seaways' of the presence of a migrant boat in the Dunkirk channel. The CROSS deployed the tug 'Abeille Languedoc', chartered by the French Navy. Its crew picked up the 35 castaways and reported that one woman was unconscious. After consultation with the maritime medical coordination service in Le Havre, the CROSS sent the 'Jean Bart II' which dropped off a doctor aboard the 'Abeille Languedoc'. The woman finally regained consciousness. The SCMM recommended a reception by ambulance of the SDIS 59. The 35 migrants, including six children and one woman, were taken care of at the port of Dunkirk by the SDIS 59 as well as the PAF. The SAMU 62 relayed to the CROSS Gris-Nez a request for assistance from migrants in difficulty off the coast of Calais. The CROSS deployed the lifeboat 'Notre-Dame du Risban' of the SNSM station Calais. The boat picked up the 24 castaways and dropped them off at the port of Calais where they were taken care of by the SDIS 62 and the PAF.

On Oct 4, 2020 at 5:24 p.m., the CROSS Gris-Nez was informed by the chemical tank m(v 'Bro Nyborg' that a migrant boat was in difficulty 24 nautical miles north of Dunkirk. The CROSS routed the tanker to the position so that it could monitor the boat and protect it from the swells while waiting for reinforcements. The lifeboat 'Jean Bart II' of the SNSM-station of Dunkirk as well as the customs patrol boat 'Jacques Oudart Fourmentin' were deployed to assist. At 7:37 p.m., the 15 castaways were taken aboard the SNSM boat in difficult conditions with rough to heavy seas. At 11.53 p.m., they arrived at the port of Calais where they were taken care of by the border police.

On Sep 22, 2020, around 8:30 a.m., the 'Jean Bart II' of the SNSM station in Dunkirk along with the patrol boat 'Jacques Oudart Fourmentin' were deployed to assist a boat in distress eight nautical miles north of Dunkirk. The boat was relocated thanks to a maritime surveillance flight carried out by a Dauphin helicopter of the French Navy. The 24 castaways were taken aboard the SNSM boat and then dropped off at the port of Dunkirk around 11:00 a.m. where they were taken care of by the firefighters and the border police.