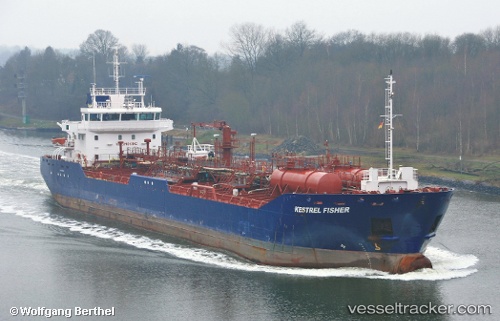 Newbuild oil products tanker, Kestrel Fisher docked in Dublin Port today, she is the second of a pair of 7,072dwt vessels operated by James Fisher Everard of Barrow-In-Furness, Cumbria, writes Jehan Ashmore. In June she entered service and her call to Dublin today sees her alongside No.1 Oil Berth, one of our such berths. It is understood she arrived from a Norwegian oil refinery at Slagen on the Oslofjord. Likewise, her elder sister King Fisher as previously reported in March, are of the ’8000′ design launched from Damen Shipyards facility in Galati, Romania. They were outfitted in the Dutch group’s Bergum yard in Harlingen. Kestral Fisher was christened by Michelle Hartnup and was delivered to Dutch owners De Opfeart Beheer. Likewise she too is operated on an open management basis by James Fisher Everard. Each of the 104m double-hulled 8,363m³ newbuilds have 10 epoxy coated-tanks. This will enable the newbuilds to carry gasoline, diesel oil, lubrication oil and jet fuels to ports and oil refineries throughout Ireland, the UK and north-western Europe. They have accommodation for captain and ten-crew, plus a guest cabin, all of which are single and en-suite. Source: Afloat

The Damen Double Hull Oil Tanker 8000 ‘Kestrel Fisher’ was delivered end 2013 to Dutch managers De Opfeart Beheer. In a two-tanker deal, the Kestrel Fisher’s sister vessel ‘King Fisher’ was delivered in June 2013. The 7,076 deadweight, 8,363 cubic metre tankers were christened at the DSB-yard in Harlingen where they were outfitted; their hulls were built by Damen Shipyards Galati, Romania. Referring to the vessels’ trade, their lady sponsors, Mrs. Petra Gaensbacher for the ‘King Fisher’ and Mrs. Michelle Hartnup for the ‘Kestrel Fisher’, of the United Kingdom both work in the oil trading industry. The vessels will dominantly carry gasoline, diesel oil, lubrication oil and jet fuels along the British Isles,