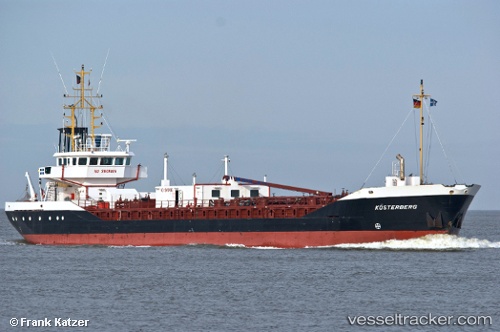 In the early morning of Sep 30, 2015, the eastgoing "Kösterber and the westbound cargo m/v "Grona Aalsum", enroute from Tornio to Flushing, and the reefer "Prince of Seas" scraped each other in dense fog during the transit of the Kiel Canal at Fischerhütte. The "Kösterberg" thereby was pushed into the embankment, thereby destroying several dolphins. One was sunk completely, another stuck into the fairway at an angle. All ships were able to continue their voyages - the "Grona Aalsum" docked at the railway pilings in Brunsbüttel at 6.15 a.m., the "Prince of Seas" at the navy pilings south in Brunsbüttel at the same time, and the "Kösterberg" continued to Kiel where she berthed at the Bominflot bunker quay at 10.20 a.m. for surveys and investigations. The "Kösterberg" departed at 6.30 p.m. and resumed its voyage from Bremerhaven to Aarhus. The "Grona Aalsum" had already sailed at 3 p.m., while the "Prince of Seas" remained in Brunsbüttel for the time being. Photo: http://forum-schiff.de/phpBB3/viewtopic.php?f=9&t=1377&p=119074#p119074

Repairs of the "Kösterberg" at the Norder Yard Hamburg were completed on Feb 3, and the ship sailed at 7 p.m. bound for Nordenham where it docked at the Rhenus S Co. on Feb 4 at 8:15 a.m. The tug "Wal" assisted by the "Finn" already on Feb 1 pulled the "Seeponton 1" from Papenburg back to Bremerhaven.

Repair of bow damage at Norder Yard in Hamburg

The "Kösterberg" unloaded its cargo at Bremerhaven from Jan 26, 7 p.m., until Jan 27, 10 a.m. After a further stop in the local North Port the ship finally sailed to Hamburg on Jan 27 around 8 p.m. and docked at the Norderyard Hamburg for repairs of its damage to the bow and bulwark on Jan 28 at 8.30 a.m.